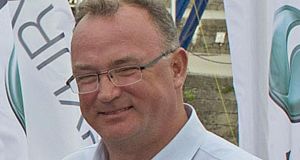 Irish Sea offshore campaigner Jedi skippered by Andrew Sarrat will be rewarded tonight at the Royal Alfred Yacht Club prizegiving after a winning margin of just one point from J109 sistership Ruth (Liam Shanahan) in the club’s 2013 offshore series.

The ceremonies mark the end of the 2013 season culminating tomorrow with the Irish Cruiser Racer (ICRA) Conference where the J109 design is again short–listed for ICRA’s coveted boat of the year award. It is just one highlight of Royal Irish Yacht Club (RIYC) hosted event.

Future venues
ICRA Commmodore Norbert Reilly will hear debate on future National Championship venues for the cruiser body as well as details of the 2014 championship hosted by RIYC.

A notice of race has just been published that reveals the championships will support the RAYC’s Bloomsday regatta on June 14th.

The championships will be held on Dublin Bay from June 13th to 15th and over 100 boats are expected to compete. After that no decisions have been taken on locations for one of Ireland’s largest sailing events. Several east and south coast events are understood to be bidding for the event. An invitation to head north to Belfast Lough for the first time in ICRA history will also be considered.

It marks further growth in Irish sea sailing where ICRA has already indicated it will help to promote a new Welsh cruiser racer championships at Pwllheli next August. Welsh yachts are expected to reciprocate by supporting the Irish event, building on the already long established links between clubs on either side if the Irish Sea. The inaugural Welsh event is promoted by Stephen Tudor, the Irish Sea ISORA Champion and the Commodore of Pwllhelli Sailing Club.

Tudor says there has been a very strong and positive response to proposals for the fixture from August 1st to 3rd 2014. (4th is a bank holiday in Ireland). The IRC National Championship is an open event and will use the facilities of the new £8.3million Welsh National Sailing Academy.

Keynote speaker
Tomorrow’s conference also features keynote speaker British journalist Matt Sheahan on foiling at the America’s Cup. Cork sailor Philip Bendon and his Irish Match Racing Irish Team who earlier this season won the under-23 European match racing championships will also speak. There will also be news of a Commodore’s Cup Team update where Ireland is expected to field a team.

In dinghy news, James Espey, Ireland’s sole entry in the Laser World Championships lies 35th in the gold fleet from 63 in Oman yesterday. British sailor Nick Thompson took his second outright win of the event that was dogged by light winds and big shifts.

A fundraising effort at the recent Craftinsure GP14 Championship of Ireland has raised more than €4,000 for Make-A-Wish Ireland. A cheque for €4,218 was presented to the charity’s representative Martina Madden by Sutton Dinghy Club Commodore Andy Johnston.

On Dublin Bay, the Fast 42 African Challenge is the overall leader after three races in the Rathfarnham Ford sponsored DBSC Turkey Shoot on Dublin Bay.