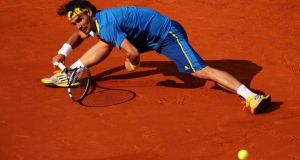 Fabio Fognini of Italy stretches to play a forehand against Rafael Nadal of Spain on day seven of the French Open at Roland Garros in Paris. Photograph: Clive Brunskill/Getty Images

The good news for Rafa Nadal on Saturday was his game began to click, the sun shone and the red clay courts got bouncy - the bad news was French Open rival Novak Djokovic looked in the mood to snatch his crown.

Djokovic responded to Nadal’s victory over Italian Fabio Fognini by thrashing stylish Bulgarian Grigor Dimitrov although the Serb was left in tears after learning of the death of his first coach Jelena Gencic, 76.

Seeking an eighth French Open crown, Nadal’s brow has been furrowed all week after two off-colour performances and a rain-hit schedule prompted a Friday rant at organisers. His smile returned after a 7-6 (5) 6-4 6-4 win over flashy shot-maker Fognini secured his place in the last 16 where he will face Japan’s Kei Nishikori.

Djokovic’s support team only told him of the death of Gencic, who discovered him as a six-year-old, after his emphatic 6-2 6-2 6-3 defeat of Dimitrov who beat the Serb at last month’s Madrid Masters. An ATP spokesman said Djokovic had broken down when told the news and left the grounds without talking to reporters.

Marathon man John Isner saved 12 match points against German veteran Tommy Haas and then had one of his own but was knocked out.

“In hindsight it probably would have been better to lose in straight sets because I feel terrible right now. But I’ll recover,” said Isner who lost 7-5 7-6 (4) 4-6 6-7 (10) 10-8. Isner, who won a world record 11 hour five minute match against Frenchman Nicolas Mahut at Wimbledon in 2010, saved eight match points at 5-6 in the fourth set and then another four in the tiebreak before taking a 4-1 lead in the deciding set.

Twelfth seed Haas, who is defying the ageing process at 35, eventually edged through to a last-16 tie with Mikhail Youzhny.

“It’s crazy, it was a big rollercoaster,” said the German.

Few players, Roger Federer included, swagger on to court quite like Fognini and at times during his opening set against Nadal the 27th seed produced strokes of magic the Swiss great would have been proud of. Nadal had lost the first set in both opening rounds and when he trailed 4-2 he looked to be digging a hole again.

The Spaniard was helped by some rash shots by his opponent as he recovered the deficit but he failed to convert three set points on Fognini’s serve in the 10th game and was immediately broken in the following game to set up a tiebreak.

The crowd were on their feet when Nadal won an incredible rally at 4-4, soaking up some punishment before curling a topspin lob over the Italian who somehow retrived it only for the Spaniard to punch away a volley at the net. Fognini hurled his racket into the sky and booted it across the clay after losing another spellbinding rally in the second set and Nadal, despite never looking completely assured against an unpredictable opponent, tightened his grip.

Nadal said he was pleased to be back on schedule after rain and cancellations meant he endured a four-day gap between his opening two rounds. He added that he would spend Sunday practising.

“It’s just work tomorrow and being positive,” said Nadal. “Things are not going well but I keep fighting and I keep trying to find a solution. I am not playing well here for the moment but we are in the second week and I need to change a little bit my dynamic. I have my opportunity on Monday and I really have big hopes that I will have the chance to change that.”

Nadal’s next opponent, Nishikori, became the first Japanese player to reach the fourth round here since 1938 when he beat Frenchman Benoit Paire who was docked a penalty point for receiving coaching. Paire was first warned for mangling a racket frame then docked a point by Eric Molina on set point to him at 5-4 in the second set after gestures were seen from the coaching box.

Richard Gasquet became the third Frenchman into the last 16 with an easy win over Nikolay Davydenko. He next plays Swiss Stanislas Wawrinka who outgunned Pole Jerzy Janowicz.