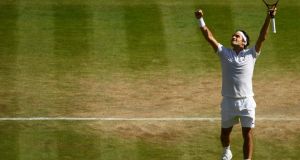 Never, ever write him off. Put the tennis obituaries back in the file. Roger Federer’s dream of a record eighth Wimbledon title is alive and well – somehow – after one of the most dramatic comebacks, even in his glory-studded career. Outgunned in the first two sets by a big-serving Croat, Marin Cilic, Federer pulled himself back from the dead, saving three match-points in the process before squeezing out a 6-7, 4-6, 6-3, 7-6, 6-3 victory to secure a place in the semi-finals for the 11th time.

It was a remarkable victory, one clinched with a 27th ace and celebrated with his arms thrust toward the sky. With his 35th birthday just around the corner and in a year in which he has been struck down with knee and back injuries, it may just go down as one of the most satisfying wins of his career.

“I was in so much trouble in the third [SET]and again in the fourth,” said Federer, who now plays the Canadian Milos Raonic. “I feel sorry for Marin but for me the dream continues. I couldn’t be happier, I thought I fought well and played super-great at the end.

“I think the last three sets were really good and it’s really encouraging to see I am improving as the match goes on. My legs were there, my back was there, serving was key and mentally this is going to give me a hell of a boost. I’m really, really pleased and just ecstatic to be in the next round.”

Four easy wins against significantly lower-ranked opponents had suggested Federer was playing well but even the Swiss had admitted that he was not yet at 100%, struggling for sharpness, and Cilic, who beat him in the semi-final of the US Open in 2014 on his way to his first grand slam title, took advantage in an impressive first two sets.

It was not that Federer was playing badly, but he could not get a racket on the Cilic serve and after the Croat took the first set on the tie-break, 7-4, and then broke once to win the second, the match looked almost done.

“I wasn’t seeing his serves any more,” Federer said. “He had one chance, he took it, next thing you know you’re down two sets on grass, He was reading my serve, I couldn’t read his serve. It wasn’t going well. I had to hang in there, somehow hope for his level to drop a little bit and that’s exactly what happened.”

Federer saved three break points to escape from 0-40 at 3-3 and then a Cilic double-fault in the next game let him back in, allowing him to serve out the third set. Both men had break chances in the fourth but Cilic had three match-points, the first at 5-4, the second at 6-5 and the third in the tie-break only for Federer to come up with some big-serving at the crucial moments, finally taking it 11-9 on his fifth set point.

Serving first in the fifth set, Federer had the edge and after missing a break point at 3-2, he finally got one for 5-3 and clinched victory with another ace out wide.