Rio 2016: the Irish in action at the Olympic Games today

They may not be household names, but they are five Irish athletes to look out for at the Rio Olympics: Scott Evans, Stephanie Meadow, Greg Broderick, Ellis O’Reilly and Fiona Doyle. 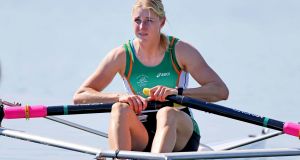 Rower Sanita Puspure will be the first Irish athlete in action at this year’s Games. Photograph: Morgan Treacy/Inpho

London-born Eilis O’Reilly will become Ireland’s first ever female gymnast to compete at an Olympic Games. The 18-year-old will be put through the same paces as male compatriot Kieran Behan was on Saturday in the hope of making it to next week’s final.

The eventing team continue their medal pursuit at the Olympic Equestrian Centre while Judy Reynolds will go through her second dressage routine.

The doubles crews begin their games in the Rio waters with the women up first. Claire Lambe and Sinead Lynch will go in lane five of the third heat in the women’s lightweight double sculls at 3.0pm. In the men’s equivalent Gary O’Donovan and Paul O’Donovan go in the first heat at 3.20pm.

After the build-up was overshadowed by Michael O’Reilly’s failed drugs test, the Irish boxers will be glad to get into the ring. Steven Donnelly opens proceedings with his 69kg preliminary fight against Zoheir Kedache of Algeria at 4.15pm.  At 9.30pm David Oliver Joyce takes on Andrique Allisop of the Seychelles in the 60kg preliminaries.

Fiona Doyle will take to the pool in heat six of the women’s 100m breaststroke at 6.11pm. In the men’s 100m backstroke heats Shane Ryan goes in heat three at 6.22pm. Depending on how they fare, both swimmers could be back for their respective semi-finals with the action beginning at 2.0am Monday morning.

After Saturday’s 3-2 loss to India, Ireland’s clash with the Netherlands is make or break as they look to advance to the knockout stages.

New money gets one over on old money as Man City defy Uefa 09:08
United slip up in top four race; reasons to be cheerful for Munster 07:00
Solskjær says Man United did not deserve to beat Southampton 06:36
Gerry Thornley: Munster will make for interesting case study when rugby resumes 06:30
James McClean says he gets no support for abuse he receives 06:34
Here is your handy guide to sport on television this week