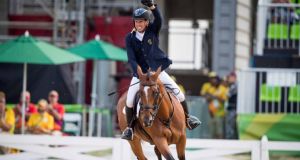 The team medals were decided in the day’s first session of show jumping where just 13 clear rounds inside the time were recorded over the Guillerme Jorge-designed 12-fence track. The first of these came from Ireland’s Clare Abbott and Euro Prince who, on a total of 112.6, moved up two places to finish 36th of the original 65 starters.

Disappointingly, the Mark Kyle-partnered Jemilla lowered the oxer at nine and the second part of the double at 11 to pick up eight penalties and they completed on a score of 109.2 in 33rd place.

In spite of being sent to the holding box at the early morning second horse inspection before being accepted by the ground jury, Cooley Rorkes Drift, the mount of Evans, looked in excellent fettle on entering the ring. The 10-year-old Courage II gelding has rarely faulted in this phase over the past two seasons and again jumped clear to progress to the individual round in 13th place.

At the top of the rankings there were major changes with France, who were third overnight, claiming gold ahead of the 2012 champions Germany, who moved up from fourth, and Australia who had gone into the lead following the tough cross-country phase. New Zealand, who were second overnight, dropped out of the medal positions.

In the later session, clear rounds were again at a premium with Evans improving to finish ninth when Cooley Rorkes Drift again left all the fences intact. A clear for Australia’s Sam Griffiths saw him finish fourth on the Irish-bred mare Paulank Brockagh while, even with a fence down, the USA’s Phillip Dutton claimed bronze on another Irish Sport Horse, Mighty Nice.

This was only possible as Australia’s Chris Burton, who had dropped from first to third after the morning session, again had two fences down with Santano II and finished fifth. Astier Nicolas, whose win in the first leg of the Event Rider Masters Series at Chatsworth House in May signalled a revival in French fortunes, added silver to his team gold even though Piaf de B’Neville crashed through the oxer at three.

This error gave some extra breathing room to the all-conquering Michael Jung but the German jumped a perfect clear to win gold on Sam, his partner at London four years ago and in many of his great triumphs worldwide.

The dressage competition at Rio 2016 gets under way at 2pm Irish time on Wednesday but Ireland’s sole representative, Kildare-born Judy Reynolds, will not be competing in the Grand Prix until Thursday.

Reynolds, who is based in Hünxe, Germany, rides the Dutch Warmblood gelding Vancouver K on which she has recorded many Irish international records. The 14-year-old bay is owned by the rider’s mother Kathleen and her father Joe, who was recently appointed chairman of Dressage Ireland.

Although some horses had to be trotted up twice, and one paid a brief visit to the holding box, all but two of the 67 animals presented on Monday passed the first horse inspection. Early on Tuesday morning, the pair were re-presented when Italy’s Chablis (Valentina Truppa) was accepted but Sweden’s Dante Weltino (Therese Nilshagen) was not.