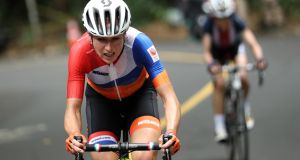 Cycling’s world governing body, the UCI, has moved to defend the Olympic cycling course after a series of crashes in both the men’s and women’s road races in Rio de Janeiro. The most serious incident left the Dutch cyclist Annemiek van Vleuten in hospital with three cracks in her spine and concussion while the Australian cyclist Richie Porte suffered a broken scapula.

“The Rio 2016 road race course was carefully designed and was extensively tested at the test event and in training,” said the UCI. “We do our utmost to design safe, challenging courses but unfortunately crashes do sometimes occur due to a combination of factors.”

Van Vleuten has tweeted from her hospital bed to say that she is OK but disappointed that the best ride of her career ended with a horror crash in the final stages of the race.

The 33-year-old was leading the peloton on the final descent of the 139.6km race on Sunday when she went over her handlebars and landed headfirst after clipping the same kerb that also ended the races of Geraint Thomas and Vincenzo Nibali in the men’s competition on Saturday.

Spectators were horrified when the Dutch woman appeared to not be moving as she lay by the side of the road for several minutes waiting for help. A video posted by a member of the public on Facebook showed her lying motionless as riders passed her down the hill with no immediate sign of medical help.

Still in the hospital. Waiting for some research&hope I can leave today. Knowing that this chance is 1 in 4 years, doesn't make it easy.

Late on Monday night local time Van Vleuten tweeted to say: “I am now in the hospital with some injuries and fractures, but will be fine. Most of all super disappointed after best race of my career.”

Others were angry on her behalf, with the former Olympic gold medallist, Chris Boardman, suggesting the course was simply unsafe. “I’m actually quite angry about it because I looked at the road furniture and thought: ‘Nobody can crash here and get up’,” he said on the BBC.

Having pulled clear of the American climbing specialist Mara Abbott on the descent of the 530m Vista Chinesa on Sunday afternoon, Van Vleuten was set for the victory of her career, with just 10km to the finish. A three-time national Dutch champion, in the 2012 Games she came 14th when her team-mate, Marianne Vos, won gold.

Sunday’s crash was the second serious cycling accident she has suffered in the last 12 months. Exactly a year before the Olympic road race she was hit by a car while at the team’s Livigno training camp in Italy. She suffered multiple broken bones and a collapsed lung.

Coming towards the end of her professional career, she has most recently been riding for the Australian team, Orica. As well as racing she owns Annemiek van Vleuten ProVelo, which organises cycling clinics and presentations.

After Van Vleuten’s crash, her team-mates waited nervously for news from the hospital. Gracie Elvin, an Australian who rides with her for Orica, said: “She’s one of the most positive people on our team, she’s been my biggest fan this year and given me lots of confidence. Sometimes she’ll even come up to me in a race and say: ‘Hey man, you’re one of the best here, you could win this race,’ and I love that about her.

“She’s super-tough, she was nearly killed last year when she was hit by a car … She recovered from that and is a really tough lady.”