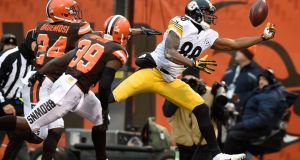 Unless teams jockeying for seeding truly thrills you, this wasn’t one of the most memorable week 17s in NFL history.

On the last Sunday of the regular season, only one playoff spot remained up for grabs, the sixth seed in the AFC, and the Pittsburgh Steelers claimed it mere hours after the early afternoon kick-off.

Pittsburgh advanced to the postseason after beating the Cleveland Browns 28-12, but they had to rely on some help.

All the New York Jets needed to do to render the Steelers’ game meaningless was defeat the very much not-playoff bound Buffalo Bills. This being the Jets, they instead threw away their shot, and a late Ryan Fitzpatrick interception helped seal a 22-17 loss.

So the Steelers made it into the playoffs partly because the Jets went and pulled a Jets, but that’s not reason enough to dismiss them as a serious contender. The 10-6 Steelers enter the postseason as the sixth seed, yes, but they haven’t really been playing like one, having gone 6-2 over the last eight weeks.

Could quarterback Ben Roethlisberger once again lead a sixth-seeded Steelers team to the Super Bowl like he did a decade ago?

Well, there are some marks against them. Pittsburgh’s defence has been inconsistent, never worse than when it allowed five Seattle Seahawks touchdowns in November. Roethlisberger has been careless with the ball. Even in Sunday’s win, he threw two interceptions, increasing his season total to 16.

Next week, they will be travelling to Cincinnati to face a Bengals team that desperately could have used a first round bye. Thanks to the Denver Broncos’ win over the San Diego Chargers, the Bengals will be forced to choose between starting untested young quarterback AJ McCarron on Wild Card Weekend or rushing Andy Dalton back early from his thumb injury.

If the Steelers get past the Bengals – and they should be favoured no matter what the QB situation – would it be shocking if they defeated any of the remaining AFC teams? The Patriots have suffered a host of injuries over the last two months, even Tom Brady is hobbling.

The Broncos have no idea what they will get from the quarterback position, which was obvious when Peyton Manning unexpectedly relieved Brock Osweiler on Sunday.

The Kansas City Chiefs are heading into the playoffs on a ten-game win streak, but nobody trusts Alex Smith to win a big game. Houston Texans may be just happy to be there.

The Vikings’ reward for winning NFC North? They host the dangerous Seattle Seahawks next week while Green Bay will hit the road to face the NFC Least winners in Washington.

Maybe they should have just let the Packers have that one. Guardian Service