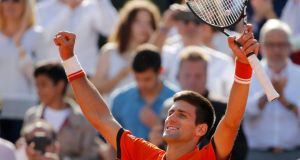 Surely none of their 43 previous encounters has been invested with the tension, significance and, ultimately, the pathos that Rafael Nadal and Novak Djokovic brought to Court Philippe Chatrier on the 11th day of the 2015 French Open.

In three sets of steadily mounting pain, the Serb won the 44th battle, his first over the Spaniard in six attempts here, the sixth of their past seven encounters, and advances to the semi-final on Friday.

It was not a contest just about the past, though; it was about the future too – more so, in fact. Of the many pivotal moments in the game in recent years, this might be the most significant: incontrovertible proof that the Nadal era of dominance on clay is over – at least as long as Djokovic is still playing. He won 7-5, 6-3, 6-1. It took him just under two-and-a-half hours.

The only empty seats in the principle bullring of Roland Garros were those left by latecomers. Even corporate guests for whom it would take the Last Coming to shift from their hospitality tents showed up on time.

And from the moment Djokovic broke after only seven minutes, it was plain this was going to be no ordinary match: the undisputed No1 player in the world seeking to dethrone the most dominant clay-courter in the history of the game on the court where he has won nine titles. The steel in Rafa’s wrists seemed a little less firm, even if his spirit blazed as hot as ever.

It was his 29th birthday and how he wanted to celebrate by beating his main rival for the 24th time.

Within 10 minutes, the Serb was 3-0 up, doing to Nadal what Nadal for so long has done to others on clay: forcing him to go for the lines. Too often he erred, while Djokovic hit flat, deep and with certainty to both flanks, taking the sting out of the champion’s replies on the run.

They traded drop-shots and lobs that had the crowd in a frenzy, and Nadal’s head drooped when his final shot of the exchange hit the net, leaving him four games down after 17 minutes, with no relief from the torture in sight.

We were now experiencing something weirdly special. So one-sided was the fight Djokovic could afford to applaud a whirring Nadal backhand that passed him down the line – but the Spaniard broke: sweet hope at last.

For six games Nadal verbalised his anxiety in grunts audible beyond the stadium, as if drowning; Djokovic cruised silently on the other side of the net, like a shark on the hunt. But then the Serb cracked. He butchered a short smash, hit a lazy forehand long, lost a long rally – and all of a sudden we could hear as well as see his concerns. He was human. He had to save two break points. Then another. And another? No. Again, he brutalised a sitter at the net. Egalite just about – at last, after 35 intriguing minutes.

A match that was shaping as a public execution had slowly turned into a classic fight, like so many of the ones that had gone before over the previous nine years.

A switch had gone off in Nadal’s bandana-ed head. He struck his first two aces and, after 40 minutes, dragged the score back to 4-4. It was Djokovic’s turn to worry – so he held to love with an unreturnable forehand on the ad line.

Djokovic had set point in the first but lobbed long, got another after a long rally of the highest quality, but Nadal saved with an exquisite drop shot (one of many in the first set).

A time violation for Nadal at deuce was, well, untimely. He hurried his first serve, made sure of his second – and Djokovic won the point for his third set point. Again, he could not handle the drop shot. Nadal held with a serve that nearly knocked the racket out of Djokovi hand and they were back on level terms at 5-5 after 55 minutes, fitting symmetry.

Within 10 minutes, Djokovic had his fourth set point – saved by the most desperate, off-balance smash on the retreat, clipping the net on its way to safety. The Serb got a fifth chance to wrap it up, with Nadal stranded at the net after retrieving another drop shot; again he saved. A sixth arrived, courtesy of a smash – and this time, Nadal cracked, his lunge at a save near the net drifting wide. They had packed a week’s drama into 67 minutes.

They sucked hard at their reviving water before resuming, like fighters coming off the stool, in expectation of the hell to come; it was one-way, though. They traded cautiously, Djokovic, ahead in the cycle, holding with less stress, holding to love with another drop shot for 3-2. He held to love for 4-3. The pressure mounted on Nadal, who’d taken just three points off his opponent’s serve in just over half an hour.

Djokovic got two looks in the eighth game and lost his shape the first time - but Nadal lost his too, a forehand hitting the tramlines, and the Serb served for the set after an hour and 47 minutes. Nadal handed him two set points with a tired forehand from deep. He wasted the first, Nadal saved the second. The fight was back on. A third chance arrived – and Djokovic hit long. He chipped short for a fourth opportunity, and landed the knockout blow, Nadal unable to respond to a forehand in the ad corner.

Three times in his career, Nadal has come back from two sets down. Not today. Not against Djokovic. Not even on clay. When Nadal blew the simplest of volleys to give up his serve at the start of the third, the denouement began to unfold with all the force of a nightmare.

Nadal bagelled Roger Federer in the final here in his pomp, five years ago. Surely he would not suffer the same fate against the heir presumptive in his own kingdom? A first double fault, after two hours and eight minutes, hinted at such a catastrophe.

Pity now replaced fascination. The champion who has always struggled for love in Paris, despite his extraordinary feats here, took on the mien of a fast-fading pug as Djokovic broke again, clipping the tape for extra pain, and the crowd went strangely silent, as if uninvited guests at the reading of a will.

Finally, Nadal held, a small but welcome respite from the onslaught, before Djokovic broke him to love in the final game. Rarely has the word “break” carried more poignancy.