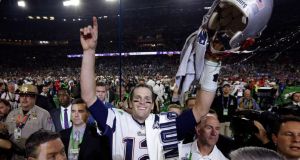 Through his childhood, Tom Brady considered Joe Montana his idol, and on Sunday he equaled the Hall of Fame quarterback with four Super Bowl wins to cement his legacy as one of the best to play the game.

The 37-year-old quarterback set a Super Bowl record with 37 pass completions to go along with four touchdown passes, but it was the poise he exhibited with the game on the line that truly showed his brilliance.

Trailing by three points with under seven minutes to play, Brady completed all eight pass attempts as he led the Patriots 64 yards in 10 plays, capped by a three-yard touchdown pass to Julian Edelman.

“He never got disappointed or discouraged when we had a couple of turnovers in the course of the game. He just kept fighting and demonstrated a lot of confidence at halftime. I think our players fed off of that.“

By winning his first Super Bowl in 10 years, Brady further solidified his status as a sure-fire first-ballot Hall of Fame player when he becomes eligible for induction.

Few could have predicted the success he would achieve when the Patriots selected him in the sixth round, 199th overall, of the 2000 NFL Draft.

Brady is fifth all-time in career passing touchdowns with 392 and fifth all-time with 53,258 passing yards. The players he trails in each category - Dan Marino, Brett Favre, Peyton Manning and Drew Brees - have nowhere near the postseason success.

“Tom‘s the best ever,“ said Edelman.

“I‘m a big Joe Montana fan. I love him to death. I thought he was the best at everything. He won four, he‘s undefeated in four, but they didn‘t have a salary cap back then.

“Tom came out here, he‘s been to six Super Bowls. He‘s won four with the salary cap. It‘s hard to argue against that.“

Brady also equaled former San Francisco 49ers quarterback Montana by being named the Super Bowl most valuable player for a third time but he was uncomfortable discussing his legacy.

“I haven‘t thought about that ... I never put myself in those discussions,“ said Brady.

The Seattle Seahawks were left stunned after coming up one yard short of a second straight Super Bowl title following one of the wildest ever finishes to a National Football League championship.

Seattle, who enjoyed some good fortune just to reach the Super Bowl, looked to have some luck left when Jermaine Kearse made a juggling catch for a 33-yard gain that put the Seahawks on the Patriots’ five-yard line with 66 seconds to play.

But after Marshawn Lynch moved the ball to the one-yard line quarterback Russell Wilson had his pass intercepted in the end zone with 20 seconds to play in what would be a 28-24 loss.

“Obviously, it’s a hard play because you just saw your dreams go down the drain,” said Seahawks defensive end Michael Bennett. “That one play doesn’t determine the game. There’s a lot of plays that everybody could have made a little bit better.”

The Seahawks were outplayed during the first two quarters, where they had the ball in their possession for just 12 minutes, but a late touchdown had them tied with New England going into the third quarter.

A 27-yard Steven Hauschka field goal and a three-yard Wilson touchdown pass to Doug Baldwin gave the Seahawks a 10-point lead that they held until near the midway mark of the fourth quarter.

“We worked so hard to get to this point and not to come out with the win is definitely disappointing,” said Kearse.

Seattle would not have even been in this year’s Super Bowl if not for some fortunate events during their improbable NFC championship win two weeks ago versus the Green Bay Packers.

The Seahawks erased a 12-point deficit with under three minutes to play en route to an overtime victory. During the late rally, Seattle enjoyed a fortuitous bounce to recover an onside kick to set up a go-ahead score.

But there was no such luck this time and cornerback Richard Sherman did his best to stay positive in the face of defeat.

“This is my fourth year in the league, second Super Bowl. So hopefully we’ll have another chance to get here and have a different result,” he said.

“I thought we had a chance, through God’s grace. He always seems to be with us in these big games.”

The Seattle Seahawks had the ball on the one-yard line, needing a touchdown to win the Super Bowl with Marshawn Lynch, one of the league‘s best running backs, in the backfield.

Yet, instead of asking Lynch to try and make that yard, Seattle ran a passing play, with Russell Wilson trying to find receiver Ricardo Lockette.

Patriots corner Malcolm Butler read the situation perfectly, timed his move and made the interception.

The decision to pass rather than give the ball to Lynch was instantly criticised by former players and analysts.

“That was the worst play call I‘ve seen in the history of football,“ tweeted Hall of Fame running back and three-time Super Bowl winner Emmitt Smith.

Seahawks coach Pete Carroll was not surprisingly the man given the blame.

“That play call will haunt Pete for the rest of his career,“ tweeted former Cowboys receiver Terrell Owens. “Give the ball to Beastmode (Lynch) in that situation.“

Carroll said his thinking was that the Patriots had their run defense in place and with his wide receivers on the field, they were not well matched-up for a run play.

“At that moment I didn‘t want to waste a run play against their goal-line guys. Throw the ball, we will come in on third and fourth down and we can match up,” said Carroll.

“It is a really clear thought but it didn‘t work out right. We happened to throw them the ball and they make a big play.

“At this time it seems like overthinking but they have extra guys at the line up scrimmage so we don‘t want to waste a run play on that,“ he said.

“We make those decisions every game, all the time. They work out sometimes and they don‘t other times. This one didn‘t work out right for us.“

Carroll said he and Wilson had shared a moment of disbelief at the end of the game.

“We just looked at each other trying to realise the gravity of what we just witnessed. We didn‘t say very much.”