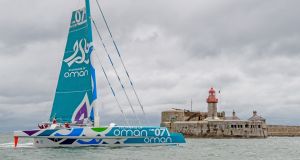 The crew of the Oman multihull celebrate their record breaking Round Ireland voyage off Dún Laoghaire. Photograph: Michael Chester

The fastest ever sailing circumnavigation was completed by the 70ft trimaran Musandam-Oman Sail on Wednesday morning, taking three hours off a 22-year-old record.

The multihull, skippered by Frenchman Sidney Gavignet and five professional crew, screamed past the Muglins Rocks on the entrance to the Dublin Bay finish line at 30-knots to claim the record in a time of 40 hours, 51 minutes and 57 seconds.

Record to be ratified

The record was officiated by Irish speed sailing commissioner Chris Moore from onboard a Dublin Bay Sailing Club (DBSC) vessel, but it has yet to be ratified by the World Speed Sailing Record Council.

The Omani crew had hoped to take as much as 10 hours off the 1993 record set by the late Steve Fossett and his Irish crew of Con Murphy and Cathy MacAleavey, but despite reaching speeds of 38 knots during the 700-mile trip had to be content with shaving three hours off Fossett’s time.

The WSSR holds a number of records for circumnavigating Ireland by sail under different categories. These include two set in 2005 – by the Cityjet/Irish Times monohull, skippered by French sailor Jean-Philippe Chomette and crew, in two and one-third days, and Belgian sailor Michel Kleinjans’s single-handed circumnavigation in Roaring Forty in four days, one hour, 53 minutes and 29 seconds.

Commodore’s Cup changes will see the reintroduction of a small boat for the team competition next year, it was announced this week. The Royal Ocean Racing Club (RORC) has agreed to a number of changes that they say will have a positive impact on the number of teams taking part in the event at Cowes, Isle of Wight on July 23rd to 30th, 2016.

The first is the requirement of every team to have a small boat with a rating between 1.000 and 1.049. “Many teams in the last event believed that it was hard to be competitive without having three boats that were close to the top of the allowable rating band, as was the case of last year’s winning Irish team,” said RORC chief executive, Eddie Warden Owen.

Title holders Ireland have twice won the Cup under captain Anthony O’Leary, and although the Royal Cork skipper’s double winning cup boat Antix was sold to Sweden this week, it is O’Leary’s “fervent hope” to be involved with the Irish defence next summer.

O’Leary is campaigning offshore this season in the renamed Ker 40, Catapult and takes in RORC’s Myth Of Malham in a fortnight before June’s Dún Laoghaire to Dingle race; both warm-up races for the season’s big one in August, the sell-out Fastnet race.