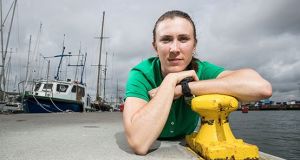 An Olympic silver medallist and a world champion will add extra spice to the All-Ireland Sailing Championships the weekend after next in Cork Harbour.

This week’s release by the Irish Sailing Association (ISA) of the 16 ‘successful nominees’ reveals that one-third of them are from the host club, the Royal Cork Yacht Club (RCYC)

The two-day championship, which is an end-of-season celebration of Irish sailing, will be sailed in National 18 three-person dinghies from Crosshaven.

Annalise Murphy’s, who won a silver medal at the Rio Olympics, easily qualified the Laser Radial class for the Irish champion of champions event, but in a stand-out year for small boat results, the fleet also includes Wicklow GP14 World Championship winner Shane MacCarthy of Greystones Sailing Club, who took Ireland’s first GP title in 25 years in Barbados in April.

In addition to Murphy, six other Dublin sailors representing five clubs will contest the 69th edition of the event, originally known at the Helmsmans Championships.

Meanwhile, in spite of the weekend’s strong wind forecast, 16 top Irish youths are gathering in west Cork for the Junior All-Ireland competition tomorrow.

Successful nominees for the Schull Harbour event also include a number of top Munster sailors, including RCYC twins Johnny and Harry Durcan who both qualify from performances in Laser Radial and 29er skiff respectively.

The event is being staged in the club’s own TR3.6 dinghies.

The ISA has hailed John Twomey’s “inspirational legacy” at the end of his last Paralympics. The Kinsale-based skipper bowed out in Rio last weekend after a tricky series left the Irish Sonar crew in 13th place overall.

Twomey and crew Ian Costelloe and Austin O’Carroll had hoped to finish on a high especially after seeing training partners finish in the medals.

The regatta marked the end of a career that includes 11 Paralympic Games, and a bronze and a gold medal in the discuss, with Twomey proudly carrying the Irish flag in Rio’s opening ceremony. Martin Byrne’s Jaguar team of Adam Winkelmann and Mark Small, from the Royal St George Yacht Club, were winners by a point of the 12-boat Dragon national championships in Kinsale last weekend.

Despite the small turnout, it was a hard-fought contest, with the first five overall each separated by a point.