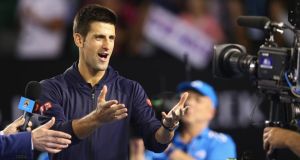 Novak Djokovic is through to the last 16 of the Australian Open after he beat Fernando Verdasco in straight sets. (Photograph: Mark Kolbe/Getty Images)

Not even the distraction of a spectator proposing to his girlfriend could prevent top seed Novak Djokovic from easing into the last 16 of the Australian Open on Saturday.

The romantic fan popped the question after the second set of Djokovic’s third-round match with Fernando Verdasco and received not only a ‘yes’, but a massive cheer from the rest of the crowd on Rod Laver Arena and applause from Djokovic himself.

By that stage Djokovic had weathered the storm and was two sets ahead, the world number one crucially winning a tie-break in the opening set after failing to convert any of his six break points.

“Credit to Fernando, it was a great match,” Djokovic said in an on-court interview with four-time grand slam winner Jim Courier. “Fernando is a top-10 player, he has played in the final stages of grand slams and big tournaments. He has big power in his game.

“Every time I had an opportunity for the break he came up with a service winner or an ace and obviously it was frustrating but I had to keep it together and the difference was made in the first set when I won the tie-break.”

Verdasco was favourite to win that tie-break when an ace took him 5-3 ahead with another serve to come, but a terrible double fault let Djokovic off the hook and the Serbian eventually took his fourth set point to win it 10-8.

Djokovic claimed an early break in the second set and crucially saved three break points in the next game with a hat-trick of aces. From then on there was only ever going to be one winner and Djokovic celebrated his 7-6 (10/8) 6-3 6-4 win by getting the crowd to sing Happy Birthday to his mother Dijana.

Next up for the four-time champion is Luxembourg’s Gilles Muller, who won a big-serving battle with American John Isner that unsurprisingly featured tie-breaks in the first two sets and a total of 54 aces.

Defending champion Stan Wawrinka had earlier continued his far more unobtrusive progress in the championship, beating Finland’s Jarkko Nieminen 6-4 6-2 6-4 to maintain his record of not having dropped a set.

The fourth seed sent down nine aces and won 90 per cent of points behind his first serve to set up a clash with Spain’s Guillermo Garcia-Lopez in the fourth round. Garcia-Lopez was a similarly comfortable winner over Canada’s Vasek Pospisil, beating the world number 60 6-2 6-4 6-4 to reach the last 16 and equal his best performance in a grand slam.

“I’m feeling good since the beginning of the tournament,” Wawrinka said. “For sure I’m not the focus on the tournament because there’s Novak, Rafa (Nadal) coming back from injury, Roger (Federer) also just lost, there’s (Nick) Kyrgios, (Bernard) Tomic still playing.

“For sure I’m not the focus. For me doesn’t matter. I’m feeling good. I’m feeling great. I’m happy the way I’m playing. To get to the second week again, it’s great. So far everything is good for me.”

Feliciano Lopez continued his charmed progress through the draw with victory over Poland’s Jerzy Janowicz, the 12th seed winning 7-6 (8/6) 6-4 7-6 (7/3) to set up a last-16 contest with eighth seed Milos Raonic.

Lopez saved three match points in his first-round match with wild card Denis Kudla, eventually winning the fifth set 10-8, and saved another in the second round against Adrian Mannarino. Lopez was trailing 4-6 4-6 0-4 when Mannarino fell ill but won the third-set tie-break and was leading 4-0 in the fourth set when his unfortunate opponent retired.

Lopez acknowledged he was making the most of his good fortune, adding: “It gives you the chance. It gives you the opportunity to play today because I was already out with Mannarino and Kudla in the first round, no?

“Today when I was out there playing, I thought I have to be pleased for that opportunity, so try your best. I think today finally I play some of my best tennis. Losing with Kudla or Mannarino I wouldn’t have the chance, so I feel very pleased.

“It’s true I have a couple of tough matches. Today was also a tough one, but it was straight sets, which is really good for my fitness condition. I feel good. I feel ready to play the rest of the week.”

Raonic continued the theme of one-sided matches by beating Germany’s Benjamin Becker – who knocked out home favourite Lleyton Hewitt in the previous round – 6-4 6-3 6-3.

The fourth round line-up was eventually completed when Spain’s David Ferrer defeated France’s Gilles Simon in four sets after threatening to squander a commanding position.

Ferrer failed to serve out the match at 5-4 in the third set and twice more in the fourth set from 5-2 up as Simon staged a remarkable fightback on Margaret Court Arena.

Ninth seed Ferrer stopped the rot and forced a tie-break in which he let two match points slip before finally completing a 6-2 7-5 5-7 7-6 (7/4) victory in three hours and 37 minutes.

Ferrer will face fifth seed Kei Nishikori in the last 16 after the US Open finalist recovered from losing the first set to beat American Steve Johnson 6-7 (7/9) 6-1 6-2 6-3.

If soul-searching was a sport, today’s GAA teams would all be champions 06:00
Matt Williams: The sky is not falling in on Irish rugby - but Ireland do need a new plan 06:00
Superfan John Murphy keen to keep streak going and make it 80 not out in Donegal 06:00
Miss Amulet looking to complete rags-to-riches success at Newmarket 06:00
Every yellow jersey winner must still feel guilty by some association 06:00
Here is your handy guide to sport on television this week