Muckross go out on penalties to Ballymoney 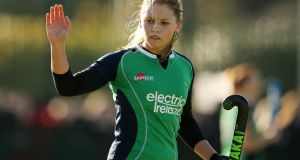 Chloe Watkins: her goal gave Leinster side Hermes a 2-1 win over Cork Harlequins

Ulster clubs got the better of their Leinster opponents in three of Saturday’s five Irish Senior Cup second round ties which paired teams from the provinces.

Muckross were the unluckiest of the losers, going out on penalty strokes to Ballymoney after a 2-2 draw. Corinthian were beaten at home by Ulster Elks, losing 6-1, while Ards also had a comfortable passage to the next round with a 3-0 win over Trinity.

For the second time in a week Hermes and Cork Harlequins squared up in Booterstown, but unlike their Hockey League game which Hermes won 3-0, their cup contest was a tight affair. Chloe Watkins’ goal gave the Leinster side a 2-1 win after a scoreless first half.

At Beaufort, Loreto eased to a 3-0 victory over UCC, their second defeat of a Hockey League competitor after ousting Pembroke Wanderers in the first round. Up north Pegasus saw off the challenge of Dungannon with a 4-1 win.