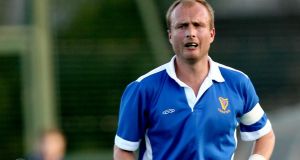 Graham Shaw: the Monkstown coach has given them a harder edge gleaned from his playing success at Glennane. Photograph; James Crombie/Inpho

Having been nearly men for a number of years, Monkstown enter the Irish Hockey League finals weekend in Grange Road hoping to confirm they have well and truly arrived at the top table.

The pain of three Irish Senior Cup final defeats in five years threatened to leave an indelible mark on their legacy as a stylish side but with little bite or major silverware to their name.

But the arrival of Graham Shaw as player-coach has steeled the side, offering them a hard edge borne from his years of success at Glenanne.

The one title that eluded him, though, was the IHL title, most frustratingly in its inaugural year when Pembroke won in a controversial penalty shoot-out.

Having annexed the Irish Senior Cup in March, ending a 99-year wait for that crown, Shaw’s Monkstown side looks well set as they standon the verge of greatness, a rare national double.

All the elements from the speedy forward trio of Gareth Watkins, Kyle Good and Davy Carson back to international goalkeeper Dave Fitzgerald while schoolboy Lee Cole was a bolter in the most recent Irish senior squad.

Lisnagarvey are their semi-final opponents on Saturday afternoon and will not relinquish their crown - and place in the EuroHockey League - easily but they have not had the fluidity of last term, scraping through the group stages with two losses on their record.

On the other side of the draw, Banbridge are going for a second win in the sport’s marquee event, playing Cookstown on Saturday in a bid to reach Sunday’s final.

Their CV includes a first Ulster Premier League title in over a quarter of a century, fulfilling the depth of work done at underage level in Havelock Park.

Steven Dowds has been the key man, firing over 40 goals to date, aided and abetted by the cultured Bruce McCandless and Peter Brown.

They emerged from the group stages with a perfect record and have already beaten their Cookstown counterparts twice in their domestic league to give them confidence of repeating their 2011 success in what is always a passionate battle.