Major Round Ireland Race overhaul starts with this year’s edition 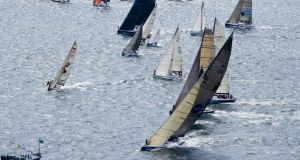 Plans to attract new entries from overseas and give the Round Ireland Race a higher international profile were announced by Wicklow Sailing Club in Dun Laoghaire yesterday and included details of the southside port being used as a technical base for larger yachts. Photograph: David Branigan/Oceansport

2016 will see a complete transformation.

A target of 100 boats has been set as the long-term goal, based on building on the interest generated by the successful Fastnet Race held in the intervening years.

The most significant change is the adoption of Dún Laoghaire as a technical base to encourage overseas entries to take part in the event that have been put off by the limited facilities at Wicklow Harbour.

A partnership has been formed with the Royal Irish Yacht Club to provide facilities ashore close the Dun Laoghaire marina for teams choosing the Dublin port as a base.

Organisers are stressing the race itself is not changing in any way, apart from loosening the requirements for mandatory reporting points around the coast in favour of modern tracking systems.

Overall limit
Recent editions have had fleet sizes of around 30 to 40 boats and while the overall limit of 75 entries has been raised to 100, Wicklow Sailing Club is not expecting more than 40 to 45 boats for this year’s race.

However, with planning for 2016 foremost, expectations are running high that a significant boost in interest can be achieved with a two-year lead time and improved promotion by both WSC and the Royal Ocean Racing Club as the major international body that organises offshore yacht racing.

Historically, the race that was first sailed in 1980 as the ultimate event for clubs around Ireland to contest has rarely exceeded 50 boats despite constant interest from overseas crews.

“We have had to change of emphasis in response to bigger boats interested in doing the race,” race director Theo Phelan told The Irish Times yesterday. “The difficulty in the past was that RORC couldn’t promote the race to its bigger boats due to the restriction on both the number of entries and also the requirement by Wicklow that the fleet should be accommodated in the harbour.”

Online entry system
The new online entry system goes live today and Phelan points to the Fastnet Race closing the entry list at 300 boats in just one day; a further 100 boats were on a waiting list and it is this demand for offshore racing that is under-pinning the plans for the Round Ireland.

“This is Wicklow’s effort to open up the race and say, ‘come on in, let’s make it happen’.”

Nevertheless, while the 605-mile “out and back” course of the Fastnet Race is the undoubted star performer in the RORC-organised calendar, Wicklow remain the organiser and lead promoter for their own event, which can’t be compared with all other races.

“We don’t compare with either the Round the Island race in Cowes (one week before the Round Ireland) or the Round Britain & Ireland Race (in August this year) as both are completely different races appealing to very specific crews,” Phelan said.

The evolution of the Round Ireland from a domestic club event to an international race tracks the changes from when offshore racing was hugely popular in Ireland and the Irish Sea region.

However, the RORC has added a 50 per cent points bonus for its season-long series that attracted 500 boats last year and participation in Wicklow Sailing Club’s race is now though essential for any boat hoping to feature in that league.
branigandavid@gmail.com