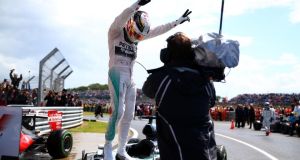 after his victory in a thrilling British Grand Prix. But they had already started.

Hamilton is an experienced celebrator, having won a Formula One race on 37 previous occasions, but there was a special energy in the Mercedes driver’s exuberance here. “The vibe, the energy is electrifying,” he said. “I am so elated you cannot imagine. It doesn’t seem real. I have to pinch myself.

“An incredible day. I don’t ever tear up very often. I’m not particularly much of a cryer. But on the last lap, last couple of laps I think it was, I was getting watery eyes.

“It was just emotion because I could see the crowd cheering in the corner of my eye. And I knew at that point there were only two laps to go and I had kept it together. When I felt the emotion coming in, I was thinking: ‘Stay focused, don’t drop it.’ It was so difficult out there. So tricky.”

His grip on first place had been loosened by his teammate Nico Rosberg over the previous two laps but the stop proved inspired as the rain started to fall more heavily and Rosberg was forced to change tyres and finished almost 11 seconds back in second place. Sebastian Vettel was third for Ferrari.

“When you are leading the race you are the first to see the conditions,” said Hamilton, who extended his championship lead to 17 points. “I was struggling with understeer but I knew I had to come in when I saw the drops on my visor.

“It’s a lottery. Sometimes you get it right and sometimes you get it wrong. When I had got the wets on, that is my ground, I enjoy that. I felt comfortable by the end.” It may have reminded him of his famous win in the wet in 2008.

He added: “I didn’t know how it was going to go. I thought when it started to rain the heavens were not going to make it easy for me. Nico was catching me and I chose to come in and change the tyres and thankfully it was the right choice. . .”

Toto Wolff, the Mercedes team boss, who the previous day had made an appeal through the Observer for people to stop knocking F1, said: “Sometimes these things just happen at the right moment. There was such a great crowd, and then a race with all the ingredients necessary for excitement. We had the right rain at the right time, and probably the right winner.

“We cock up together and we win together, and the exchanges on the radio about what was happening and the strategy were spot on today.

“When the rain hit us, it was so calm on the radio about the options, but then it was Lewis’s call. He made that pit call at the right time, using the right information.

Referring to Hamilton, he added: “If you are a double world champion and win so many races, you are a complete racing driver. You can’t put him in a box and say he has only God-given talent. He has to have a view of the whole picture and that was clear here.

“This was Lewis’s home grand prix, there were great crowds and it was a relief from the talking down of the sport we have had. We also had the fastest ever pit stop – 2.4 seconds . . , including reaction time.”

Rosberg said: “I was pushing hard to try and catch Lewis under difficult conditions but he made the better call and that is where I lost it. Fair play to him.”

Eddie Jordan, the BBC TV analyst, summed it up when he said: “Lewis is on another level. The championship last year made him much stronger, gave him that steely fight in his eyes. He walks through the paddock with that little strut. He knows he is the best.” – (Guardian service)