Leaders UCD battle back to preserve their unbeaten record 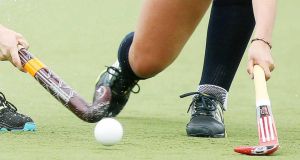 They might have dropped their first points of the league campaign on Saturday, but defending Leinster champions UCD managed to fight back from 2-0 down with just 10 minutes to go against Railway Union to maintain their unbeaten record.

Scoreless at half-time, the game at Park Avenue burst in to life after the break, Kate Dillon giving Railway the lead 10 minutes in before Kate McKenna set up Julia O’Halloran, her expert reverse strike doubling the lead. Deirdre Duke, though, created the opening for Elaine Carey to bring the students back in to the game, with Brenda Flannery then equalising from a smartly worked short corner.

Loreto took full advantage of the top two’s draw by beating Corinthian 4-1, Niamh Small scoring twice, a result that puts them level on 14 points with Railway and two behind UCD. Pembroke Wanderers, meanwhile, kept in touch with the leaders with a 1-0 win over Old Alexandra, while Hermes, in fifth, scored as many goals against Trinity – seven – as they had done in their previous four games.

In Munster, Catholic Institute, Cork Harlequins and UCC are all tied on 15 points at the top of the table, Institute’s 4-1 win at Church of Ireland the pick of the top three’s victories on Saturday.