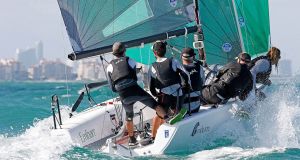 A sole Irish sportsboat maintains its lead into the final stages of the 74-boat Melges 24 World Championships in Miami, Florida.

The Conor Clarke-skippered contender has an eight-point lead over Italy’s Gian Luca Perego after six from a scheduled 14 races sailed on Biscayne Bay.

Clarke’s Melges campaign in a boat named ‘Embarr’, has previously chalked up some impressive results, including second overall at October’s US championships.

Racing concludes on Saturday but with up to eight more races left to sail and a change of conditions expected overnight in Florida, Clarke insists the championship remains ‘wide open’.

Meanwhile, Cork schoolboy Johnny Durcan is one of two talented Irish sailors heading off to New Zealand this week for the World Sailing Youth Championships.

A place on the podium for the Royal Cork sailor is the aim; a bid to match club-mate Seafra Guilfoyle’s silver medal from 2014 and provide another boost for Cork Harbour youth sailing.

Durcan started his season with a third-place finish at the youth nationals and from there went on to Hyeres to finish ninth at the biggest Laser Radial Europa Cup of the year in France.

Following that he finished fourth at the Holland Europa cup and then third at the Belgium Europa Cup.

From there Durcan travelled to Weymouth and became British youth champion the following week. The last event of the summer was the national championships in Galway which he also won to earn himself a place at this month’s worlds. To cap off a season he also won the Junior ISA All-Irelands in late September in Schull.

In the girls class, Ireland will be represented by Dun Laoghaire’s Nicole Hemeryck, who placed seventh in the U19 girls competition at radial worlds in Dublin.

Hemeryck was also second in the under-19s (13th overall) at the under-21 worlds in Kiel, Germany.

Unfortunately, there will be no Irish representation in the 420 class in New Zealand. Howth pair Douglas Elmes and Colin O’Sullivan picked up this country’s first-ever world youth bronze medal in the double-handed class a year ago.

Elsewhere, Rio silver medallist Annalise Murphy has been made an honorary member of the Irish Sailing Foundation (ISF).

The announcement was made by the ISF, the new investment support structure for Ireland’s high performance sailing programme.