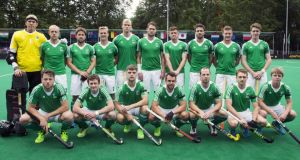 Ireland’s men’s hockey team added yet another incredible result to their ever-growing list in 2015 as they squeezed out a draw against world number four side Belgium in London to reach the semi-final of the European championships for the very first time.

It was tense and scrappy, untidy at times but Craig Fulton’s charges have developed a happy knack of getting the outcomes they need in recent times.

The knack brought them to the brink of Olympic qualification last month with wins over higher ranked Pakistan and Malaysia at the World League semi-final.

And they used the experience in a clinch to hold off their much vaunted opponents, getting the draw they needed to go with a narrow loss to Olympic champions Germany and a 4-3 win over France earlier in the competition.

After a sketchy first quarter, Ireland bossed the second phase and went ahead in the 27th minute when Shane O’Donoghue rolled his marker and picked out Peter Caruth for a close range finish.

Early in the second half, Sebastian Dockier equalised with razor sharp reactions to whip up the rebound off David Harte’s pads.

But there were no notions of protecting the draw they needed to advance and John Jackson restored the lead within five minutes. His sharp hands volleyed in just his third international goal in over a century of matches after O’Donoghue - Ireland’s key man in midfield - had fired goalwards.

Florent van Aubel levelled for a second time with 20 minutes to go but the sting went out of the Belgian fightback when Gauthier Boccard was shown an extremely harsh yellow card, sitting out ten minutes of the final quarter.

Ireland kept their powder dry amid the driving rain for the most part, going closest to grabbing a third goal before a late Belgian onslaught in the final minute. Two penalty corners in the last 45 seconds were shut down and the draw was complete.

Monkstown man Caruth was later named man of the match and he was breathless after the tie in hailing the performance.

“What a game! We knew we had to come out and play, not defend for a draw. Some decisions back and forth didn’t go our way but we stuck with it and fought our way to the result.

“The late corners did add to the tension but we practice for those situations for when it comes down to the wire. It was a dogfight and what we had to do.”

The result means Ireland keep alive their chances of earning a direct Olympic qualification berth as continental champions. Their performances in London have also seen them move up the World League list from which the other Olympic qualifiers are drawn.

It means that if world number one side Australia win the Oceania Cup or South Africa win the African Nations Cup, both in October, Ireland will qualify for the Games for the first time since 1908.