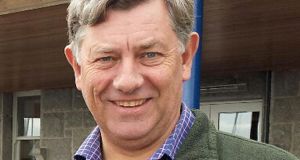 Charles Apthorp was the winner of the Flying Fifteen East Coast Championships in Dun Laoghaire.

Dinghy and one design sailors are racing to the end of October thanks to some innovative Autumn fixtures promoting new freshwater venues.

Tomorrow, the River Liffey is the venue for the Royal Alfred Yacht Club’s new Laser dinghy challenge and next week Lough Derg Yacht Club (LDYC) gears up for one of its biggest events of the season with the multi–class 2014 Freshwater Keelboat Regatta on October 19th in Tipperary.

The East Link Toll bridge lifts at 10.15 for the Lasers, racing is from 11.0 followed by a prize-giving at Poolbeg Yacht & Boat Club from 3.0pm. Others heading for the capital’s waters include experienced campaigners Theo Lyttle, Rob Cahill and Sean Craig.

In a busy conclusion to the Flying Fifteen season, September’s European championships was followed last weekend by a runaway victory for UK visitor Charles Apthorp, the former world champion, who took four wins out of five in the 24–boat East Coast Championship fleet on Dublin Bay. Second overall were Bay locals David Gorman and Chris Doorly. Clean sweep The Fireball class shared the same National Yacht Club (NYC) course and Barry McCartin and Conor Kinsella earned another title, retiring from the last race of the day without compromising their march to a clean sweep of regatta wins in the 2014 season. Noel Butler and Stephen Oram secured second from Kenneth Rumball and Finn Bradley.

The Flying Fifteens are one of five classes heading for Lough Derg next Friday for the 2014 Freshwater Regatta. What started out solely as a Dragon regatta in 2005 is expected now to have a turnout of over 70 boats at Dromineer for the inland fixture that also includes SB20, Squib and J24 fleets.

Abroad, Irish Laser Master champion Nick Walsh lies 21st in a fleet of 116 at the Laser Master Worlds in Hyeres, France that has drawn a combined fleet of 499 boats for the age 35 and over event.

The Irish team consists of Worlds stalwart and Great Grand Master Denis O’Sullivan. Chris Arrowsmith from Royal St. George YC is in the Grand Master category. Ed Rice and Nick Walsh from Royal Cork YC (RCYC) along with Colin Galavan from the Royal Irish YC (RIYC) and Kevin Currier from Ballyholme are in the Masters fleet. The team is completed by three Apprentice Masters, Dan O’Connell from RCYC, sailing coach Thomas Chaix and Paul Keane also from RIYC.

Tomorrow’s winter lift out of cruisers from their summer moorings at Dun Laoghaire harbour makes room for next month’s popular and long-running Dun Laoghaire Motor YC dinghy frostbite series scheduled to take place each Sunday on Dublin Bay or inside Dun Laoghaire Harbour from November 2nd right through to March 22nd next. Classes include PY, Laser, RS (200 & 400), and Fireballs. Entry is now open but limited to a maximum of 120 boats on a first come, first served basis.

In Howth, Class One of the Autumn league is dominated by Pat Kelly’s J109 ‘Storm’ in both IRC and ECHO divisions with ‘perfect scores’. Kelly is now discarding first places leaving the competition to compete for the minor places.

1 Leo Cullen: ‘It feels like it all came crashing down on top of us’
2 Dave Hannigan: How Christy Ring arose the curiosity of American media
3 Oisin Murphy denies taking cocaine after failed drugs test in France
4 Johnny Sexton captains Leinster against the Dragons
5 Rugby Stats: Contrasting preparations by four provinces for start of Pro14
Real news has value SUBSCRIBE