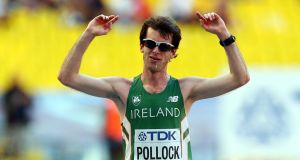 Only 314 days to go! No one does this cheap and tiresome countdown better than the Olympics. And no one recognises the utter nonsense of it better than those trying to make it to Rio on time.

Because for some it’s more like one day to go – starting and finishing with Sunday’s Berlin Marathon. A large group of Irish distance runners are in the German capital this weekend for the sole purpose of qualifying for the Rio Olympic marathon. It might not necessarily be their last chance, but it’s definitely their best one. And they’ve long since lost count of how many days it’s already taken to get this far, or how long they’ve put their lives on hold.

They haven’t all found themselves in Berlin by coincidence, either. The 26.2-mile course, from the Brandenburg Gate and back again, is justifiably considered the fastest in the world: the last six men’s world records have been set here, as recently as last year, when Dennis Kimetto from Kenya ran 2:02:57.

The Rio Olympic qualifying standard is set at 2:17:00 for the men (and 2:42:00 for the women). That might sound reasonably attainable, although the only Irish man to so far go inside it is Martin Fagan, who ran 2:16:09 in Zurich, back in April. Then, for a variety of reasons, not least some of the grief he was getting for returning from a two-year doping ban, Fagan retired. It’s a pity because marathon running talents such as Fagan don’t come along very often.

Anyway, there is still a broadly talented group right now all capable of running inside 2:17:00. Ideally, that will create one of those welcome selection dilemmas. Only three places are available for Rio, although no one is losing the run of themselves just yet: Ireland hasn’t qualified its full quota of three men’s marathon runners since Barcelona, 1992.

Paul Pollock certainly intends on completing his road to Rio in Berlin. At 29, he’s put his life on hold for at least two years just to get this far – and that includes a busy career as a doctor in the A&E Department in the Royal Hospital, Belfast. It’s also three years now since Pollock was the first Irish finisher at the 2012 Dublin Marathon, where he ran his still personal best of 2:16:30. He’s now boldly determined to improve on that in Berlin.

Both Mick Clohisey and Sean Hehir fancy their chances in Berlin too – or at least their coach, Dick Hooper, does. For Hooper, who ran two Olympic marathons for Ireland, their miles have been run and their promises kept. Indeed Clohisey, also 29, was in danger of drifting away from the sport a few years back, before Hooper helped him promise to give it one last go.

Neither Clohisey nor Hehir have hesitated in putting their lives on hold either. They both fall short of any Sports Council funding, so Clohisey trains full-time (as in twice a day, every day) on mostly family support, or else the few shifts he can fit in at his local Spar in Clontarf. He ran 2:17:43 in his marathon debut in Rotterdam in April.

For Hehir, the road to Rio has already been long and hard, and so determined is he to complete it that he’s taken unpaid leave-of-absence from his teaching position at Scoil Mhuire Gan Smal, in Inchicore (at least for the month of September, while high-altitude training at Font Romeu).

The Clare native, former classmate of All-Ireland winning hurling captain Pat Donnellan, ran his best of 2:17:35 when winning the Dublin Marathon in 2013, and again, on the day, sub 2:17 is perfectly attainable.

Then there’s Sergiu Ciobanu, clearly not an Irish-sounding name – although at this stage as good as. Born and raised in the small town of Marculesti in Moldova, Ciobanu came to Ireland 10 years ago, working his way up through a variety of jobs, and also the Irish distance running scene. In 2009, in the colours of Clonliffe Harriers, he was the first Irish finisher in the Dublin marathon, and repeated that feat last year. Now training and working as a physical therapist in Cahir, Co Tipperary, and married to a Kildare woman, Eimear.

His IAAF transfer from Moldova to Ireland was completed in July, clearing his way to run for Ireland in Rio. With a marathon best of 2:15:27, from 2012, Ciobanu, now 33, has been a loyal supporter of the Irish distance running scene.

There are several dark Irish horses, or rather runners, also in Berlin: Kevin Seaward, training partner of Pollock, ran 2:18:46 last year; Gary Thornton, another primary school teacher from Galway, ran 2:17:29 in 2012; and Mark Hanrahan from Cork is making his marathon debut, with definite potential to run close to 2:17:00.

There is one leading Irish woman amongst them, and Lizzie Lee – also from Cork – should run well inside the 2:42:00-standard. The others, namely Fionnuala Britton and Maria McCambridge, have marathons lined up for next month, and again there should be one of those welcome dilemmas when it comes to deciding which Irish women get to run in Rio.

What is certain is that after Berlin and the rest of the autumn marathons, any Irish man or woman still hoping to run the Rio Olympic marathon will be able to count the number of days to go.

Imperious Roger Federer thumps Krajinovic to set up Millman show 13:31
Leona Maguire and Stephanie Meadow embark upon historic 2020 season 11:00
Naomi Osaka and Coco Gauff set up repeat showdown in Melbourne 08:41
Arsenal deny Chelsea at the death; Why there’s more to Saracens than money 07:51
Novak Djokovic swats aside Ito to reach Australian Open third round 07:20
Here is your handy guide to sport on television this week