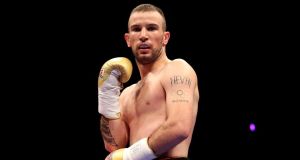 All athletes know the importance of running with the legs, not on them. It’s the difference between floating over the ground and impacting on it – apparently it’s just as important for boxers.

Towards the end of John Joe: Reality Bites – the latest documentary from Kim Bartley – there is a scene where John Joe Nevin goes running for the first time since his legs were broken during a family feud near his home in Mullingar last April.

This is just some of the compelling footage Bartley has captured over the last year. She has a record of being in the right place at the right time. In 2003 she first made her name, along with Donnacha O’Briain, with The Revolution Will Not Be Televised, where by mostly pure coincidence they captured inside footage of the failed coup against then Venezuelan president Hugo Chávez.

Bartley also got an unlikely break with John Joe: Reality Bites, because the initial intention was simply to capture Nevin’s transition from amateur to professional boxing played out against his Traveller background. Indeed the opening sequences are largely predictable, as Nevin walks away from an amateur career that saw him win medals at every level including the Olympic bantamweight silver in London 2012.

Nevin also retains his trainer Brian McKeown, of Cavan boxing club, who he’s worked with since age 12, and for good reason: “John’s the most naturally-gifted athlete I have seen since George Best,” says McKeown.

Still, things don’t go exactly to plan, Moran realising Nevin “is always thinking about going home as soon as he gets here”. Nor is he willing to sell himself. “I hate this, I swear,” says Nevin, wincing, during the promotion of his professional debut in Boston on St Patrick’s Day last year.

Anyway, Nevin wins that fight – an undisputed decision over the previously unbeaten Alberto Candelaria, from Puerto Rico – before, two weeks later, Nevin is knocked off his feet in every sense.

His right tibia (shin bone) was broken in two places, the pieces protruding through the skin, and his left fibula (calf bone) was also broken just above the ankle. After the operation that followed he was given a “50-50 chance” of making it back into the professional arena.

This is when reality clearly bites, as Nevin openly admits losing himself to alcohol for several weeks, initially wheelchair-bound, and then struggling around on crutches. It’s also here that Nevin describes the importance of his legs to his boxing: “Everyone can punch,” he says. “Not everyone can do my moves.”

His legs were his gift, more than his fists – and if both arms had been broken in that feud it mightn’t have been as bad.

Now, those legs are utterly wasted. By the time the cast is taken off his weight has dropped from 66kg to 59kg and his legs are as thin as sticks. On his first day back in McKeown’s gym he’s struggling to bench press 50kg, when 112kg was once standard.

Then, against all odds Nevin is back in the ring, winning a low-key comeback fight in North Carolina on October 11th, against American Calvin Stifford. A month later he’s at the 3 Arena in Dublin, where he knocks out Britain’s Jack Heath in 88 seconds. “That’s what lighting a few candles does, saying a few prayers, visiting the church every week,” says Nevin, when explaining where at least part of his faith and self-belief comes from.

What is undeniable is that Nevin now has a greater realisation of the importance of boxing with his legs, not just his fists, and even after a bad break like that has kept alive his dream of winning a world title. “Maybe it’s a blessing,” he says. “I’m even better now, because I know what opportunity is made of.”

1 Tipping Point: DeChambeau’s transformation raises questions, but who will ask them?
2 Ken Early: Resurgent United can be the top team – in Manchester
3 Mental clarity in chaos: Novak Djokovic, the man who turned two into three
4 Coronavirus implications will delay completion of CVC’s €450m Six Nations deal
5 Monica Seles: The warrior queen who could have been the best ever
Real news has value SUBSCRIBE