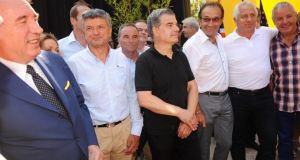 Lance Armstrong’s reappearance on the fringes of the Tour de France last week was greeted at the race with the sort of enthusiasm usually reserved for bad odors. That is in stark contrast to Greg LeMond, the other American Tour champion, who not only received a warm reception when he returned last year, but who is increasingly becoming an institution.

After a long absence from the Tour, LeMond has become the host of a daily show and the face of cycling on Eurosport. It is a rare Eurosport vehicle that does not have an oversize portrait of LeMond on its exterior.

In a motor home so decorated and sitting just beyond Monday’s finish line, in Pau, LeMond seemed both surprised and pleased to find himself back at the race that he won three times, this time as a different kind of celebrity.

“It’s great; I think I’m more popular now than even as a Tour winner,” LeMond said while keeping an eye on a small television showing the race. “Obviously the show helps. But maybe it’s because there are a lot of people who really love cycling who, after a dark period in cycling, remember my victories as the last, maybe, the last clean period in the sport.”

LeMond’s delight at being at the Tour again is a relatively new phenomenon. From 1999, when Armstrong won his first Tour de France, to 2010, when Armstrong abandoned his comeback attempts after his fall from grace, LeMond said, he was an outcast.

A particularly low point came in October 2002, when Tour organisers staged an elaborate presentation of former winners while unveiling the route for the race’s 100th anniversary edition in 2003.

Although LeMond, 54, was the first American winner, in 1986, and won in perhaps the Tour’s most exciting finish, in 1989, and repeated in 1990, he said he was routinely shunted aside to avoid contact with Armstrong. It was also his sense that he was placed on the fringes of public gatherings, or not seated at the head table at formal dinners, so he would not diminish the glow of Armstrong, who in October 2002 had won four Tours to LeMond’s three.

“I didn’t come back because of my experience in 2002,” LeMond said.

The main reason for the tension was LeMond’s speaking out about doping, something rare for prominent figures in cycling at the time, and his suggestion that Armstrong was not clean.

LeMond said Armstrong knew he was the one person who could call him on it. “I knew what was going on,” LeMond said. “I didn’t think he had the talent to do what he did.

“I don’t really understand how he did it with the doping. That’s just one of the mysteries that I can’t understand.”

Then came the year LeMond recalled as the most stressful in his life, 2008. At the time, Trek, Armstrong’s bike sponsor, licensed LeMond’s name for a line of bikes. After accusations by LeMond that Armstrong had used performance-enhancing drugs, which ultimately proved true, Trek ended the arrangement, and they became mired in two years of litigation.

Despite that, LeMond said he was not all that keen about a suggestion from his wife, Kathy, that they should visit the Tour in 2013 with their children.

It turned out, he said, that not only was he welcomed, but the crowd also chanted his name when he made an appearance at the finish at l’Alpe d’Huez, the ski resort climb where the real racing of this year’s Tour will conclude on Saturday.

Eurosport approached him not long afterward to do a daily live show at the race. He turned the channel down five times, he said, before yielding in February 2014. (In a twist, Eurosport was acquired by Discovery Communications, the American broadcaster that at one point sponsored Armstrong’s team.)

LeMond found appearing at the Tour last year, and facing a full studio for his show, more than a bit intimidating.

“I was really nervous about not having all my facts and being accurate about stuff,” he said between interruptions to meet V.I.P.s outside the motor home. “But I really enjoyed it last year. I’m having a good time, I think.”

The program is now broadcast live in 21 languages and 68 countries in Europe and parts of Asia-Pacific.

LeMond said that he believed that if cycling was to fully recover its reputation, it must avoid its tendency to idolise star riders.

“I’ve always said if you can’t clean up the peloton, get rid of them,” he said. “Because you know that there will be new young kids, new riders. It’s not the stars. The public wants to see genuine human performance, human suffering.”

LeMond, however, is generally optimistic about the sport and its current state. He is even selling bikes again — through his own business this time. While at the Tour, he rides for about an hour for two days followed by two days off on an orange LeMond bike.

His renewed enthusiasm stems in part from the enormous growth in recent years of mass participation rides that sit somewhere between racing and touring. The annual event organized by the Tour de France this year lured 15,000 riders who paid to ride a variation of Thursday’s actual Tour stage in the Alps.

“I love that it’s not just spectators watching the Tour de France, but people ride their bikes,” LeMond said, lamenting that he did not go Monday because of the heat. “You have to realise that cycling is a great liberator and great exercise. I didn’t start cycling to race. I just loved riding my bike.”