'Greedy’ Ronnie O’Sullivan into the UK Championship final after comeback 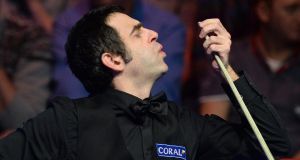 Ronnie O’Sullivan blows on his cue tip in his semi final match against Stuart Bingham during the 2014 Coral UK Championship at the Barbican Centre, York. Photograph: Anna Gowthorpe/PA

Ronnie O’Sullivan fought back off the ropes after fearing Stuart Bingham was about to deliver the knockout blow to his Coral UK Championship title bid.

The four-time champion admitted any boxing referee would have stepped in to halt a similarly one-sided contest in the ring, after Bingham powered to a 4-1 lead in their semi-final at the York Barbican Centre.

At a venue which has staged top-class fights before, playing host to local hero Henry Wharton and a young Joe Calzaghe in the mid-1990s, a “greedy” O’Sullivan resurrected his trophy mission with some spectacular counter-punching, finishing with breaks of 117 and 94 to win 6-5 and set up a final clash with Judd Trump or Stephen Maguire.

Bingham had won just two of 11 previous matches against O’Sullivan, but curiously both those victories came in the UK Championship, at Telford in 2010 and in their quarter-final last year in York.

The Basildon battler began the latest contest by rifling in breaks of 66, 49, 73 and a 137 total clearance, but thereafter O’Sullivan’s game was transformed.

“If it was a boxing match they would definitely have stopped it and you’d be talking to Stuart Bingham as the winner,” O’Sullivan said.

“In the first five frames he gave me a good hiding and I couldn’t compete. If he’d kept playing like that it was 6-1 all day long, and I was lucky to get a frame.

“He outfoxed me, outpotted me and outscored me and looked so comfortable around the table. I got away with that one really. I got lucky.”

Despite skipping several minor tournaments, O’Sullivan has a happy habit of challenging for the big trophies, and has never lost a UK Championship final, first winning the tournament as a 17-year-old in 1993.

He is looking to cap a hugely successful 2014, in which he has landed titles at the Masters, Welsh Open, and Champion of Champions, as well as finishing runner-up to Mark Selby at the World Championship.

O’Sullivan’s ongoing success in York comes despite the ankle break he sustained on the eve of the tournament. With six wins already, plus a 147 break which stands to earn him £44,000, he is eyeing the £150,000 top prize on Sunday.

“If I play like I did in the last three or four frames, I’ll be all right. But what we’re talking about here is consistency. Consistency is the key,” O’Sullivan said.

“I’m being ultra critical here: I’m in the final of the UK Championship and I won the last tournament. But I’ve always been like that and it’s difficult to paint a rosy picture because I want more, I’m greedy.”

Bingham let thoughts of reaching the biggest final of his career enter his head, and it cost him.

Asked what caused the turnaround, the 38-year-old said: “I think it was when I thought about the final. I was thinking that it’s not every day you get the chance to get to the UK final, and that was it.

“I didn’t get a chance in the last frame. He took the bull by the horns.”

Irish man David Morris reached the last 16 of the competition, beating world number one Mark Selby 6-4 in the second round.