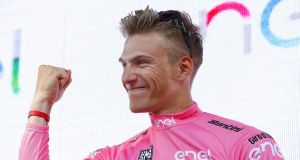 German rider Marcel Kittel of the Etixx–Quick-Step team wears the overall leader’s pink jersey as he celebrates on the podium after winning the third stage of the Giro d’Italia between Nijmegen and Arnhem. Photograph: EPA

German Marcel Kittel took the overall lead in the Giro d’Italia on Sunday after winning his second consecutive stage with another demonstration of his considerable sprint prowess.

Kittel followed up on his victory in Saturday’s second stage by outsprinting Italian pair Elia Viviani and Giacomo Nizzolo to win the 189km stage three from Nijmegen to Arnhem and claim the pink jersey.

“I am super-happy to have this leader’s jersey,” said Kittel after ending the race’s three-day grand partenza in the Netherlands with a flourish.

Ireland’s Nicolas Roche has had a solid start to the Giro, sitting 21st overall. Roche is 39 seconds behind Kittel while Philip Deignan is 128th overall, three minutes 49 seconds behind.

The riders will now enjoy a rest day as they travel to Italy for the remainder of the three-week race. The Giro will resume in Calabria on Tuesday with a 200km rolling fourth stage from Catanzaro to Praia a Mare.