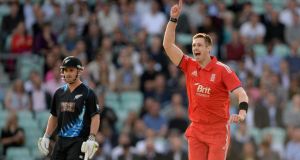 Former Ireland opening bowler Boyd Rankin took a wicket with the fourth ball of a promising debut for England in last night’s five-run Twenty20 International defeat against New Zealand at The Oval.

The 6ft 8in Warwickshire player had James Franklin caught behind for a duck and ended up with figures of one for 24 from his four overs.

Rankin’s first cap automatically rules him out of Ireland action for four years, although it must be hoped that England see the 28-year-old as part of their set-up in the long-term and not a stop-gap in their hectic early summer schedule.

Dominated last hour
The North County all-rounder dominated the last hour of play, hitting 42 at number 10 to show off the depth of the home batting line-up in a total of 364 that guaranteed them the full quota of four batting bonus points.

He then removed the international duo of James Shannon for a duck, trapped leg-before, and finished off by surprising Knights’ skipper Andrew White with a ball that reared up, took the edge and ended up in the hands of John Anderson at first slip .

Patrick Collins could have made it an even better start but he spilled an edge from Chris Dougherty off the bowling of John Mooney in the previous over, with the Knights closing on 20 for two.

Fine knock
Leinster’s innings was built around a fine knock of 86 from Anderson, who continues his great form ahead of next week’s Intercontinental Cup clash against the Netherlands in Deventer.

Kevin O’Brien will captain Ireland in that match and the Railway Union player hit 51 from 54 balls. Watching Ireland coach Phil Simmons would also have been delighted with Stuart Poynter’s shot-making in his 54 from 55 balls after naming the wicket-keeper in his squad for next week’s game.