‘We’ve studied allegations against Patrick Hickey, from what we know he’s not guilty’ 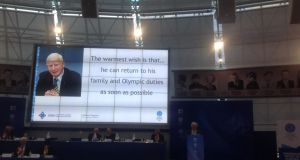 The acting president of the European Olympic Committee (EOC) has made an emotionally charged defence of Pat Hickey, claiming he is “not guilty of any criminal offence” despite his arrest for ticket touting at the Rio Olympics.

Janez Kocijancic from Slovenia took over the EOC presidency after Hickey temporarily stepped down from the role following his arrest on August 17th at Rio’s five-star Winsdor Marapendi Hotel: Hickey also stepped down from his presidency of the Olympic Council of Ireland (OCI), and surrendered his position on the executive committee of the International Olympic Committee (IOC).

Until now, no one within the Olympic movement has offered any public support for Hickey, although Kocijancic, speaking this morning at the 45th General Assembly of the EOC in Minsk, Belarus made clear his thoughts on the issue.

“We have studied the allegations against Patrick Hickey and from what we know he is not guilty of any criminal offence,” Kocijancic told delegates.

“He should enjoy the privilege, which is also part of basic human rights, that he should be able to prove his innocence.

“He is not in the best health, his health is deteriorating. He has had problems with the heart. He needs heart surgery and doctors think he should be treated in Ireland.

“Our wish is that the authorities take this health situation very seriously and will allow him to come back to Ireland.”

According to an event report from the Inside the Games website, Belarus Republic president Alexander Lukashenko, who is also president of their National Olympic Committee (NOC), also opened the assembly with a similarly strong defence of Hickey, suggesting there was “no proof” and only “made-up” accusations of his involvement in the Rio ticket touting scandal.

This was said against the backdrop of a picture of Hickey, presented on a large screen, with the message: “The warmest wish is that... he can return to his family and Olympic duties as soon as possible” - which according to reports from the event, was greeted with warm applause.

The EOC assembly is being hosted by the Belarusian National Olympic Committee.

The 71 year-old Hickey remains in Rio awaiting a trial date: after spending 11 days and night locked up at Rio’s notorious Bangu prison, along with fellow Irish suspect Kevin Mallon, he was released, partly due to his “critical health”; then, on September 10th, a Rio judge accepted the charges filed by prosecutors against him, of “facilitating ticket-touting, formation of a cartel and ambush or illicit marketing”. If found guilty, Hickey could be facing up to seven years in jail.

He has surrendered his passport under the conditions of his temporary release, and is not permitted to leave Brazil. He’s staying at an apartment in the fashionable Leblon Beach district of Rio, paid for by the OCI, with a 10pm curfew, and an order to report to a special Olympic court on the 20th day of each month.

There is no indication yet of a court hearing date, nor is there any deadline to set one, which means Hickey could be waiting several more weeks or even months before being brought to trial.

In the meantime the EOC assembly also confirmed a likely venue for the 2019 European Olympic Games, Hickey’s pet project, first staged in Baku last summer under controversial circumstances, given the poor human rights record of Azerbaijani.

Kocijancic, the 74 year-old and vice-president of the EOC before temporarily assuming Hickey’s presidency, confirmed to delegates that Minsk is now ready to step in.

The EOC have been searching for a host city since The Netherlands withdrew on the eve of Baku 2015 and then Russia dropped out of the running after the IOC warned they would not support events there following allegations of state-sponsored doping.

This was also confirmed by Lukashenko: “Belarus is not a superpower, but we are paying a lot of attention to sport.

“I want our European organisation to be as good as the organisations of other continents, including the International Olympic Committee. In this regard I am a nationalist and a patriot. Therefore, you can count on Belarus. We have made a historic decision, and will welcome European athletes here for our Olympics in 2019.”

However, awarding the European Games to Belarus could lead to further criticism of the EOC due to allegations of poor human rights in Belarus. Lukashenko has been criticised for human rights violations and persecution of non-governmental organisations, national minorities and opposition politicians.

1 Sligo meeting abandoned after four races due to safety concerns
2 Rory McIlroy steadies the ship after shaky start at US PGA
3 Andy Farrell admits Ireland net may need to be spread wide in the autumn
4 McIlroy and Lowry in the mix at US PGA; Farrell knows Ireland will need to adapt
5 Real Madrid crash out to relentless Manchester City performance
Real news has value SUBSCRIBE