European Games kick off in Baku as focus moves to sport 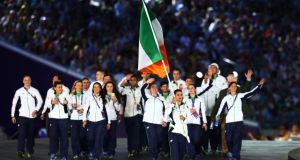 Boxer Katie Taylor leads the Ireland team into the stadium during the opening ceremony for the 2015 European Games at the National Stadium in Baku, Azerbaijan. Photograph: Francois Nel/Getty Images

History in the making – or how winning a medal of any colour at the first European Games in Baku will make a little piece of history, even if it’s never to be repeated.

That’s a strange slogan for any sporting event. Buy the ticket, take the ride. Except no one knows how long it will last.

The problem with trying to sell anything for the first time is convincing the buyer it will have lasting value, even if it’s only sentimental. If these European Games are to make history they will need to last and while that is clearly the ambition, it’s simply too soon to tell. There may be another edition of these games in 2019, but no one knows exactly where yet either.

Nothing about the opening extravaganza suggested any lack of lasting ambition or left any doubt about what the staging of these games means to the people of Azerbaijan – or at least to those in the capacity crowd of 68,700 inside the Baku National Stadium. Although the sight of Lady Gaga performing Imagine on a piano drowning in roses was strangely ironic: it was hard not to imagine what the journalists and human rights activists behind bars would have made of it, when their only crime was trying to do their job.

Anyway, it clearly means a great deal to Azerbaijani president Ilham Aliyev, and for good reason, given he has forked out the best part of €9 billion to get Baku ready, on top of the operating budget of almost €1 billion. There’s also no denying that it means a great deal to our own Pat Hickey, president of the European Olympic Committee (EOC).

The only question now is what these games mean to the athletes. And by athletes that really means boxers, swimmers, cyclists, etc, because instead of being the headline act, as it is in the Olympics, athletics is the supporting act here. It was only very late in the planning when the European Athletics Federation – which already stages its own European Championships – threw Baku a tiny scrap in the form of the fourth division of their annual team championships, the very bottom tier (it consists of Azerbaijan, along with Albania, Andorra, Armenia, Austria, Bosnia & Herzegovina, FYR Macedonia, Georgia, Israel, Luxembourg, Malta, Moldova, Montenegro and the Slovak Republic).

So, no Irish track and field athletes then (who compete next weekend in their second-tier team championships, in Greece). If these games are to have any lasting value, the track and field competition will need to move up a few tiers. Not many countries would be willing to fork out €540 million on a new stadium, like Baku did, with only the immediate promise of a two-day fourth division team championships.

It will also be interesting to see how many of the 68,700 seats are filled for that two-day competition, next Sunday and Monday week.

In the meantime there is a strong chance the 63-strong Irish team will have won its first European Games medal by the time most of you read this. One of the first medal events in the opening session is the women’s triathlon (8.30am Irish time), and Aileen Reid goes to the starting line currently ranked top European. It’s clear what Baku means to her: the triathlon is one of the few events with direct qualification for the Rio Olympics, both the men’s and women’s winners guaranteed a starting spot next summer. Reid is well placed to qualify for Rio anyway, but no one would turn down the chance to qualify more than one year out.

Reid, however, is the triathlete in form, and a medal of any colour would certainly mean a little piece of history for the Derry woman.

Although not officially affiliated with the IOC, the Olympic rings are engraved on each one of these European Games medals, and that certainly gives them some lasting value, even if it’s only sentimental.

“I have another chance to make history, here,” says Taylor, who, as in London, carried the Irish flag in last night’s opening ceremony. “We’re all here to win the gold medal, but only one person walks away with it, and I plan to be that person. I want to be the best female boxer of all time.”

Of all the competitors in Baku, Taylor may actually have more to lose than to gain, given her now considerable unbeaten record. But if there is only one chance to become the first ever European Games champion, it’s the chance to make another little piece of her sporting history, especially if that’s never to be repeated.