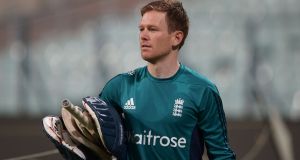 It is every aspiring top sports person’s dream to captain their country in a World Cup final, whatever the sport. That dream persists - even if the team is England and you are an Irishman.

In a week when Irish people have been indirectly commemorating the rupture with England which followed on from the Easter Rising, it is noteworthy an Irishman will captain England in the cricket Twenty20 World Cup final on Sunday.

Eoin Morgan (29), from Rush, Co Dublin, first expressed a desire to play for England as a teenager when he won a scholarship to Catholic University School (CUS) in Dublin to play cricket.

There was nothing unusual about that aspiration, as it is not possible to play Test cricket for Ireland - although the national team is on course to get an opportunity in the coming years.

In these circumstances, the England Test team is the de facto British and Irish Lions of cricket.

A precocious talent, Morgan made his Ireland debut at 16 and went on to win 63 caps before declaring for England in 2009. He qualified because of the four-year residency rule.

He fulfilled his ambition to play Test cricket, but limited overs (one-day games) was where he excelled.

Now he is set to find himself on the brink of World Cup glory when he leads England to play West Indies in the final in Kolkata. The team he is facing is coached by former Ireland manager Phil Simmons - a measure of how Irish cricket has progressed over the last decade.

Morgan comes from four generations of cricketers. His proud parents Jody and Olivia and other members of the family have been in India, watching as his son’s England team lived dangerously but have grown in confidence as the tournament has progressed.

“They have the skills and he lets them out to do it,” Jody Morgan said of his son’s philosophy. “That hasn’t changed since he was playing cricket when he was five or six. He keeps very calm. He was taught to be very calm in difficult situations. These situations bring out the best in him.

“This is a very young England team and they are on the top of their game. You are picked on your skills and you are allowed to use your skills. It is no different from Dublin football. I would know Jim Gavin [Dublin manager] very well .”

Jody Morgan says his son’s ambition was always to be the best he could be and to go where that led him. “He is very strong mentally, which is more than called for at this present time,” his father explains.

“It is difficult for him, leading a very good England team, but he is proud of his team and his family as well. He doesn’t forget where he comes from.”

Aside from one or two remarks on social media about him not singing the national anthem, nobody has remarked on this Irishman’s captaincy of an England team. Morgan countered critics by stating that he never sang the Irish national anthem either when he was playing for Ireland.

“We would be very patriotic, and none better than Eoin to have respect for his history,” his father explains.

“This English-Irish thing, I think that day is long gone. We have a mutual respect for England, as they have for us.”