Stephen Cook scores debut on his debut at Centurion 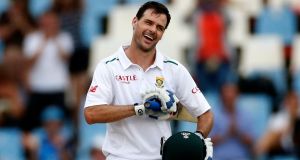 South Africa’s Stephen Cook celebrates his century on his debut during the fourth Test against England at Centurion, South Africa. Siphiwe Sibeko/Reuters

Until Ben Stokes’s competitive spirit and Stuart Broad’s wonderful versatility began to pull England back in the final session, South Africa had threatened to run away into the distance with the first day of the final Test at Centurion.

There was a sublimely nonchalant 25th Test century from Hashim Amla, and skilful one from the opener Stephen Cook, the sixth from his country to make a hundred on debut. Together, the pair added 202 for the second wicket as England, under the weather with the ball and unable to grasp the half chances that can make such a difference, struggled to gain any control with the ball.

At tea, South Africa were 224 for one and already batting England out of the game it seemed. Gradually, though, England began to stem the flow of runs and, with Cook inching his way to three figures, made their breakthrough.

Almost inevitably it had to be Stokes who delivered in the time of need. Amla had made 109, with 19 fours, when he pushed forward to a length ball and diverted it from his inside edge onto his leg stump. The relief of bowler and team-mates was palpable for Amla, missed at first slip when on five, had batted with such easy fluency for almost three and three quarter hours that a repeat of his Cape Town double century looked there for the taking.

The dismissal of AB de Villiers was a bonus. With the ball old and soft, the pitch generally unresponsive to orthodox seam and only the merest hint of shape in the air, Broad had decided to cut down on his pace, throttling back into the crease, and pulling his fingers down the left side of the ball to produce his leg cutter, the delivery that moves away from the right hander after pitching. It is a delivery Broad has mastered in the past year and one in which he has tutored Jimmy Anderson. Once he found the edge of Amla’s bat, only for the ball, played with the softest of hands, to drop frustratingly short of Alastair Cook at first slip.

De Villiers, though, was new to the crease and pushed hard at his second ball, another leg cutter, and this time the edge flew comfortably to second slip where Joe Root took the chance well. Broad has now dismissed De Villiers 10 times in Tests and twice for ducks in the last three balls he has bowled at him. Maybe, De Villiers might be thinking, this captaincy lark is a bit trickier than it first seemed.

England had gone some way towards squaring things in that final session for by then both Cook and JP Duminy, two of the five changes South Africa had made to their XI, also departed. When Cook, on 115, deflected a ball from Chris Woakes onto his wicket, it gave the bowler something back towards the end of a chastening day for him in which he struggled for consistent length and line and was severely punished as a result.

Duminy’s was a second wicket for Moeen Ali, lbw as he missed a pull shot. In the last hour, Temba Bavuma (32 not out) and Quinton de Kock (25 not out) seized back the initiative with a vibrant unbroken sixth wicket stand of 55, taking advantage of the hardness of the second new ball: no playing for stumps for Bavuma who drove thrillingly right to the last. South Africa will resume on 329 for five.

Cook, 33, is the latest in a list of sons who have followed their fathers into Test cricket, but none will have seen such a disparity between the debut fortunes of this lad and his dad. Apartheid meant that Jimmy Cook was late to Test cricket: he edged the first ball of his first Test to second slip for a golden duck.

The father was in the stands watching his son as he turned his first delivery to the square leg boundary and, four and a half hours later, clipped a ball from Stokes through midwicket for the two runs that took him to his hundred. If it was an impressive display of how to construct an innings, then no less so was the understated manner in which he acknowledged his achievement, as if he had been there many times before. Certainly South Africa seem to have found the opening batsman for which they have been searching, weight of runs in domestic cricket earning him his opportunity.

Both he and Amla were helped on their way by particularly poor England bowling. This is a pitch of inconsistent substance, dry mostly but with soft areas. It promised to be two paced and, later in the match, when the inevitable indentations have hardened, should see some uneven bounce.

Batting last could be tricky, so there was no doubt that De Villiers would bat first on winning the toss, as would his opposite number. There was a little early life, as might be expected, particularly for Broad, and England gained a fortuitous early wicket when Dean Elgar, in an exploratory over from Moeen Ali, looked to hit him violently over the top but got an inside edge which lodged somehow in the nether regions of James Taylor, who rummaged around and triumphantly produced the ball.

The seamers struggled for an efficient length, over-pitching too often in search of swing on a humid day, and paid the price as Cook proved a fine player in particular off his legs and Amla simply creamed the ball through the covers and midwicket almost at will.

Amla is not a batsman to give a sucker an even break. It was Stokes whom he edged very low towards the England captain, who, perhaps distracted by Jonny Bairstow diving across him, or indeed if Bairstow got a faint deflection, spilled the chance.

After lunch, when Cook had 47, he similarly edged Broad, and although the keeper was right to judge that it would not have carried to slip, he managed only finger tips and Cook survived.