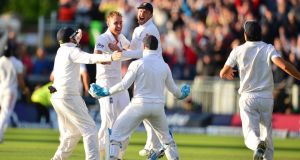 Stuart Broad is congratulated by his England team-mates after taking the wicket of Peter Siddle to secure victory over Australia in the fourth Test at Chester-le-Street and secure a third straight Ashes series victory. Photograph: Owen Humphreys/PA

England secured a third consecutive Ashes series win for the first time in 32 years following a stunning Australia collapse late on day four of the fourth Test at Chester-le-Street.

Broad, who completed a second 10-wicket haul of his career, and Tim Bresnan did all of the late damage as Australia were bowled out for 224 to seal a 74-run win.

It meant England moved into an assailable 3-0 lead in the five-Test series.

Bresnan triggered the collapse when he found extra bounce to catch the edge of dangerman David Warner (71), who had combined in the first century opening stand of the series – by either side – with Chris Rogers (49).

Australia, who were 120 for one at tea, were still seemingly favourites when Warner was third man out at 5.26pm with 131 required.

But when Broad bowled skipper Michael Clarke with a peach of a delivery with the first ball after the final drinks break, Australia began their slump towards defeat.

In a mad half-hour Bresnan and Broad dismissed Clarke, Steven Smith, Shane Watson and Brad Haddin to expose the tail.

Australia’s bowlers held on long enough to take the game into an extra half-hour, and at one time force England to bowl their spinners as the light faded, before Broad returned to have Siddle caught by James Anderson at mid-off.

Ryan Harris’s Test-best figures of seven for 113 put the clamps on an England tail that was in a hurry this morning.

Nightwatchman Bresnan (45) led the heavy hitting after Harris removed overnight centurion Ian Bell (113) and Matt Prior from successive balls with the lead at 219.

But Bresnan, with the help of Graeme Swann (30 not out), went on the attack before England were bowled out for 330.