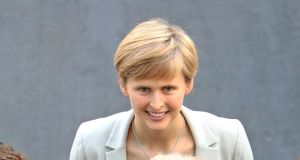 Emma Gray: won 118 caps for Ireland in an illustrious career.

After seven years as Ireland goalkeeper, Emma Gray called time on her international career this week.

The Hermes player signs off with 118 caps to her name, making her Irish hockey’s most -capped female goalkeeper.

“Emma has been the backbone of the Irish defence for several years,” said Ireland head coach Graham Shaw.

“She led by example on and off the pitch throughout her international career. Her composure and dedication will be sorely missed. We all wish her the best in her retirement.”

Gray, who made her debut alongside current captain Megan Frazer back in 2008, will continue to play club hockey with Hermes while pursuing her studies.

Her and her teammates’ ultimate dream of qualifying for the Olympics was dashed back in June when defeat to China in a shoot-out denied them a place in Rio next year.

On the club front, Loreto and Muckross will attempt to maintain their perfect starts to their Leinster Division One campaigns, both sides having won their opening three games. Loreto are away to Avoca, who have yet to pick up a point, while Muckross host Corinthian, who are currently joint third in the table. Leinster League: Division One – Tomorrow: Avoca v Loreto, Newpark, 9.0; Muckross v Corinthian, Muckross Park, 10.30; Genesis v Glenanne, St Raphael’s, 1.0; North Kildare v Rathgar, The Maws, 1.0.

Love tears them apart in stunning Epsom Oaks romp 16:33
Valterri Bottas pips Lewis Hamilton to pole in Austria 15:43
Chris Martin steals a point for resurgent Derby against Forest 15:23
Brighton see off doomed Norwich to edge closer to survival 15:09
Eamon O’Shea: We spent quite a bit of time talking about older people rather than to them 08:00
Here is your handy guide to sport on television this week