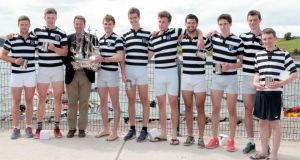 Trinity’s senior eight will be represented at the National Rowing Championships this weekend.

The compact powerhouse of Irish rowing has been coaching the exciting new lightweight men’s double of Paul and Gary O’Donovan, who feature in the big Ireland team at the World Cup Regatta in Lucerne. But in direct opposition this Friday to Sunday is the Irish Rowing Championships at the National Rowing Centre – and the driving force of Skibbereen Rowing Club is Casey.

The lead story of the championships is the men’s senior eights. Their win at Cork Regatta, beating UCD and Irish champions NUIG/Gráinne Mhaol, provided Trinity with a surge of confidence and they went on to do well at Henley.

However, UCD have fielded an intermediate crew this season. With the big men from Old Collegians (Seán Jacob, Albert Maher and Dave Neale) now on board, they may just be fast enough.

Maher is entered in the senior single sculls, where John Keohane will also have to overcome Erik Rowan if he is to complete a three in-a-row.

The women’s senior eight also has a UCD-Trinity battle, but with an interesting composite of UCC and Skibbereen taking on both.

Sanita Puspure is Ireland’s best hope for a medal in Lucerne, but on Friday she faces Olympic silver medallist Fie Udby Erichsen and bronze medallist Kim Crow with just one automatic qualifier.

This is the big test before the World Championships, which hold Olympic qualification places.

The Rio hopes of three other crews will also be tested: the women’s double of Helen Hannigan and Lisa Dilleen can prove that they have improved through the coaching of Guiseppe De Capua; the pair of Leonora Kennedy and Monika Dukarsa will aim to show their worth; Sinéad Jennings teams up with Claire Lambe in a new lightweight women’s double.