Dan Martin on course to lead squad in France 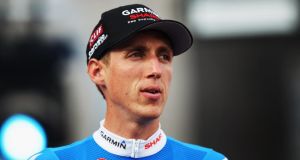 With just more than two weeks to go until the start of the Tour de France, it remains to be seen how many Irish riders will line out in the event.

Dan Martin’s fine seventh overall in last week’s Critérium du Dauphiné makes him a certainty for the race, and should also hand him leadership status with the Cannondale Garmin squad.

Three other Irish riders are in the running for the event and while Sam Bennett’s buildup has been complicated by the lingering effects of illness, he too is expected to be there.

Although Bennett was forced to miss his two preparation events, Sunday’s Rund um Koln and the four-day Ster ZLM Toer, which began Wednesday, his Bora Argon 18 team is keeping its faith in him and believes he will make his debut in the race. He was recently named as co-leader of the squad for the event, and will have the team’s full backing for the bunch sprints.

Contacted yesterday by The Irish Times, a Team Sky representative said he was unable to indicate at this point if one or both would be in the Tour.

However, Roche has been part of Chris Froome’s support team for much of the year and it is understood that he is still under consideration.

As for Deignan, the team is thought to be happy with his ride in the Critérium du Dauphiné and he remains in the frame for a possible start.

The British squad indicated that a final decision on the eight riders to support Chris Froome will be made after the conclusion of the Tour de Suisse this weekend.

Elsewhere, a strong Paracycling World Cup campaign drew to a close in Yverdon-les-Bains, Switzerland, on Tuesday with ninth place in the women’s tandem road race for Katie-George Dunlevy and Fiona Guihen, plus tenth in the men’s C2 road race for Colin Lynch. The team netted a total of three medals during the contest. Lynch won the C2 time trial on Sunday while Eoin Clifford took the C3 time trial. Clifford then placed third in the C3 road race on Monday.