All-rounder John Mooney was referenced as an ‘alcoholic’ 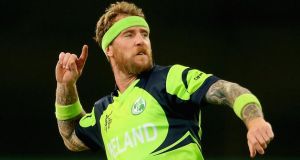 Cricket Ireland have condemned an article in the Zimbabwe Herald which referenced John Mooney (above). Photograph: Quinn Rooney/Getty Images

Cricket Ireland has condemned an article in a Zimbabwe newspaper in relational to Ireland all-rounder John Mooney as having “demonstrated breath-taking crassness and a gross error of editorial judgement”.

The article in the Zimbabwe Herald – headlined on its website ‘Alcoholic dumps Zim out of WC’ – relates to Zimbabwe’s five-run defeat to Ireland in last Saturday’s World Cup game in Hobart in which Mooney took a crucial catch on the boundary to dismiss Zimbabwe batsman Sean Williams for 96. The result ended Zimbabwe’s hopes of making the quarter-finals of the competition.

The decision was reviewed by the television umpire to see if Mooney’s left foot had touched the boundary marker, but after lengthy replays there was no conclusive evidence.

Williams had already left the field of play before the review process was completed and so could not have returned even if the reviews showed that Mooney’s foot had touched the rope in the course of taking the catch.

Both Williams and Zimbabwe captain Brendan Taylor said afterwards that they took Mooney’s word that the catch was good and the North County player subsequently revealed that he was 100 per cent sure there was no contact with the boundary.

Mooney, 33, revealed last year that he suffers from depression and has had issues with alcohol abuse in the past and came home from an Ireland tour to the Caribbean at the beginning of 2014 due to his illness.

The article printed on Monday by Zimbabwe Herald sports editor Robson Sharuko repeated large parts of an interview Mooney did on RTÉ radio with Hugh Cahill in which the Balbriggan man talked openly and honestly about his ongoing battle with depression.

Mooney has also become an ambassador for the charity Aware, which supplies support and educational services for people suffering with depression, and wrote a blog about how his illness has affected him. The blog was carried in The Irish Times, and was widely commended.

Sharuko later poses a question “but is it possible for a person like Mooney to be trusted?” among many other personal attacks against the cricketer.

Responding to the article, Cricket Ireland chief executive Warren Deutrom, who worked as a journalist, released the following statement.

“In relation to the story that has appeared in today’s Zimbabwe Herald, it would be easy to dismiss it as a childish diatribe if it wasn’t for the vicious personal attack on John which cannot pass without comment, and possible action.

“John represents his country with honour, distinction and integrity. That he does in the face of personal challenges about which he has spoken openly and movingly demonstrates incredible hard work and great courage.

“We understand, as does John, that public figures may occasionally be subject to negative comment, but in mocking John in such a contemptuous fashion, and using his personal difficulties as a mere punchline, the Zimbabwe Herald has demonstrated breath-taking crassness and a gross error of editorial judgement. We have made contact with ICC to understand what remedies might be available to us.”

The Zimbabwe Herald is closely linked to Zimbabwe president Robert Mugabe and his ruling Zanu-PF party, which have been criticised for their tinkering in the affairs of Cricket Zimbabwe, who govern the game in the African country.

Sports editor Sharuko was banned for life by the Zimbabwe Football Association for his role in a match-fixing scandal involving the Zimbabwe national soccer team losing matches in Asia.

For anybody sufering with depression Aware is the nationwide organisation providing vital support and information to individuals, families and communities who are affected by the illness. The organisation also seeks to create greater public awareness about the nature and consequences of depression which affects more than 450,000 people in Ireland at any one time. Aware offers a range of services – from a local helpline (1890 303 302) to email support (wecanhelp@aware.ie), support groups and a Life Skills Programme based on principles of cognitive behavioural therapy (CBT), alongside group and online programmes.