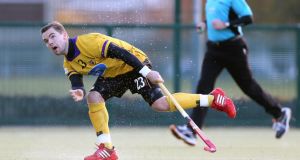 Despite Pembroke and YMCA’s best efforts, Cookstown and Lisnagarvey scraped through to the semi-finals of the Irish Hockey League despite losing 3-2 respectively on Saturday in the last round of group matches.

In both cases, the losing bonus point garnered by the Ulster sides was enough to edge out their Leinster rivals who needed to run up big wins to have any hope of advancing.

YM were the ones to come closest to their target, giving Garvey a huge fright when they went 3-2 up with nine minutes to go with Stephen Parker and Jamie Tobin swapping the lead into their favour after Steven Arbuthnot and Stuart McNeice had given the northern side the balance of power.

It gave them a glimmer of hope of getting the three-goal win they required and they threw everything at it, swapping out their goalkeeper Iain Walker for an extra outfielder.

But no further goals came while Lisnagarvey almost killed off the tie when James Lorimer’s drag-flick against an unpadded goalkeeper was deflected onto the crossbar.

It meant they joined Banbridge as the side to progress from Pool B and they go on to meet Monkstown in the semi-finals.

Banbridge eased to top spot in the pool with a fifth straight win, seeing off Glenanne 2-1 in a low-key affair while Railway Union landed a 4-2 win in Cork against C of I, setting themselves up nicely for tomorrow’s Neville Cup final against Pembroke.

In Pool A, Monkstown dropped points for the first time in the competition when William Edgar and Andy Williamson struck in the second half for Annadale to earn a 2-2 draw.

Pembroke, meanwhile, were set the target of winning by five in Cookstown’s newly renamed Steelweld Park and they had a glimmer of hope when Alan Sothern scored twice in the first half to see them go 2-1 up at half-time.

But they were pegged back when Jon Ames volleyed in a shoulder-high effort and while Sothern completed his hat-trick – bringing his season’s tally to 54 – Cookstown took second spot.