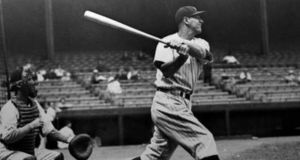 A baseball bat used by Lou Gehrig at the twilight of his legendary career with the New York Yankees sold for $715,120 over the weekend.

The bat – a 34-inch, 36-ounce Bill Dickey model Louisville Slugger – was used by Gehrig in 1938, his final full season as a key cog in the early dynasties of the Yankees franchise, according to SCP Auctions.

It may have been used by Gehrig in a World Series sweep of the Chicago Cubs that year and the next spring, said the company, which indicated that it had received 26 bids for the bat before online bidding ended Saturday.

SCP Auctions, which is based in Laguna Niguel, California, and specialises in sports memorabilia sales, would not identify the buyer, other than to say it was a private collector.

Gehrig gave the bat, which was made from ash, to Earle Combs, a one-time Yankees teammate and coach who, like Gehrig, was elected to the Baseball Hall of Fame, the company said.

“It’s one of the best Lou Gehrig bats ever discovered and, obviously, the provenance is impeccable,” David Kohler, the auction house’s owner, president and chief executive, said.

With his batting average having fallen below .300 and his home run production waning, Gehrig dispensed with his heavier bat toward the end of the 1938 season.

The 1939 season was Gehrig’s last in baseball; the durable but ailing first baseman, who was known as the Iron Horse, removed himself from the line-up that May after playing in 2,130 straight games.

He was found the next month to have amyotrophic lateral sclerosis, the fatal neurological disorder that later became known as Lou Gehrig’s disease. He gave his farewell speech on July 4th, 1939, a moment dramatised in The Pride of the Yankees, a 1942 film starring Gary Cooper.

“When this bat was found,” Kohler said, “we were like, Wow, this is a remarkable piece of history for baseball fans, Yankee fans and Lou Gehrig fans.”

The six-figure price might give some people sticker shock, but other bats and baseball artefacts have commanded much more on the auction block.

As part of the same online sale in which Gehrig’s bat was auctioned, an original home plate from Yankee Stadium that was installed just before opening day in 1923 sold for $303,277.