Dubliner claims breaststroke medal and his first success in a major championship in a time of 26.56 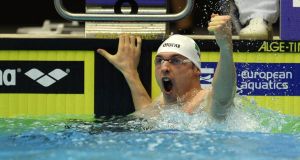 Barry Murphy took a bronze medal on Saturday at the European Short Course Swimming Championships in Herning, Denmark. The 28-year-old follows Grainne Murphy, Melanie Nocher and Sycerika McMahon as the fourth medallist for Ireland at the championships in four years.

Barry came out of the morning’s 50m Breaststroke heats as the sixth fastest qualifier and following the semi-final earlier that evening where he swam the exact same time as the heat, 26.86, he was ranked eighth overall.

Swimming in the outside lane, Murphy knew he would need to be first to the wall at the 25m mark or with the leaders to have a chance at a medal. He started strongly clocking the fastest first 25 metres of the ten swimmers and knowing a medal was in sight finally touched in 26.56 to claim the 50m breaststroke bronze medal – his first at a major championship.

Afterwards Murphy said “I’m really delighted; I knew I was in with a shout off the rankings and the times I posted during the summer, so I tried to keep my cool all day and execute my plan for the swim. It came down to hundreds of a second for the medal and thankfully I got my hand on the wall to secure the bronze.”

The Dubliner is one of 20 full time swimmers who train at Swim Ireland’s Performance Centre at the National Aquatic Centre. Damir Dugonjic of Slovenia was the gold medallist in the event in 56.21.

Fiona Doyle finished her championship with an impressive 14th place finish in the 100m breaststroke. Doyle was sixth in the first heat with a time of 1:06.77. Russia’s Yuliya Efimova continued her good form in the breaststroke events setting a new championship record of 1:03.27.

Meegan said: “It felt good throughout but I possibly went out a bit slow at the start, there are a few things to work on for the next time so that’s a good thing but I was definitely happy with how it went.”

Bethany Carson swam her third lifetime best of the meet with a 1:00.50 in the 100m Butterfly while Brendan Hyland was just off his best time in the 200m butterfly clocking 1:59.86.

Murphy was the first of five Irish swimmers back in the pool yesterday morning swimming in the 50m butterfly heats. He touched in 24.26 outside his best time and Irish record of 23.38 set earlier this year.

Brendan Hyland and Andrew Meegan finished off their championships with a 1:51.41 and 1:55.36 respectively, also in the 200m freestyle.

O’Neill steps into the unknown as Galway eye silverware 05:00
Johnny Sexton: ‘It hurts more when you are captain’ 01:00
Marcus Rashford is Man United’s hero in the Paris rain again 22:27
Chelsea stand tall defensively to repel Sevilla and come away with a point 22:22
Champions League round-up: Juventus and Barcelona off to winning starts 22:11
Here is your handy guide to sport on television this week