Angling Notes: Anglers have every angle covered at annual fishing expo in Swords 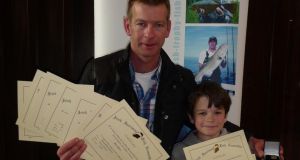 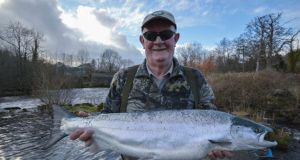 Sean McNeice, from Portrush, with his 14lb 9oz fresh salmon from the Drowes.

Ireland’s Angling Expo at the National Show Centre in Swords last weekend was again a resounding success, with an additional 17 exhibitors to add to the regular 100-plus stands. All disciplines of the sport were catered for, including casting demonstrations and talks by the very best in world angling circles.

“I’m really pleased with the turnout, up by 10 per cent on last year,” said Hugh Bonner of Mara Media. “Moving the theatre talks upstairs created a lot more space, and the celebrity ‘Battle of the Anglers’ team challenge each afternoon created great excitement in the indoor pool.”

Startling statistics were revealed at the RNLI stand. More than 350 anglers from all over Ireland visited the stand for lifesaving tips and sea safety advice, and to avail of the free life-jacket clinic. Out of 37 life-jackets checked, 31 were found to be faulty – a huge 84 per cent with safety issues.

“A life-jacket is useless if you don’t wear it, but it’s also important to maintain it properly,” said John McKenna, coastal safety officer with Howth RNLI. “Three simple steps could help save your life: check the gas canister is in good condition and screwed in properly, the firing head is within its expiry date. and that a crotch strap is attached securely.

“As spring approaches,” he says, “more people will be taking to the water. We want everyone to enjoy the water, but to respect it too. By maintaining and wearing a life-jacket properly, anglers and boat users will give themselves the best possible chance of survival in case of an emergency.”

Ironically, Mara Media is hosting a Skipper Expo Show this Friday and Saturday in the Galway Bay Hotel, Salthill, at which the main theme is geared to safety at sea. Bord Iascaigh Mhara (BIM) as the sole sponsor, will be promoting the importance of basic safety training from their coastal training unit (located in nearby car park) and the BIM stand.

Running simultaneously with last week’s show in Swords, the Irish Specimen Fish Awards took place at the nearby Bewley’s Hotel, with more than 250 specimen certificates presented.

In his keynote address, broadcaster and angler Derek Davis appealed to anglers to pass on their skills to young people. He highlighted the quality of angling in Irish waters and that the younger generation just needed the support of adult mentors to enjoy angling and go on to catch the “big ones”.

Several young anglers who caught specimens were presented with certificates and specimen badges. Top juvenile and winner of the Dr Arthur Went Young Angler award was Conor Ward from Baltinglass, Co Wicklow, for a roach/bream of 5.75 lbs in Lough NaBlahy.

Four new Irish records were established in 2014. Aaron Cummins for a 14.24kg carp from Loughgall, Co Armagh; Stephen O’Neill, a golden grey mullet of 1.2kg from Cork Harbour; Ian Mulligan, a thin-lipped mullet of 2.86kg at Clonakilty; and Tom Walsh for a spur dogfish of 11.06kg from Red Bay, Co Antrim.

River Drowes salmon
After a slow start to the season, the River Drowes has, at last, picked up pace with six fresh salmon caught within the last week, the largest of which was a 14lb 9oz fish on prawn by Sean McNeice from Portrush.

Fined for illegal fishing
At a sitting of Galway District Court last Monday, Judge McCarthy convicted a man on two counts of illegal fishing, and issued fines of €450. Costs of €600 were also awarded. The Galway man was charged with use of a scheduled engine; fishing with live bait; use of more than two rods and refusing to give his name and address while fishing in a small rubber dinghy on Ballyquirke Lake, Moycullen, Co Galway.

Waterford fly fishing competition
The Waterford City and County Trout Anglers’ Association is holding an open fly fishing competition for the Carrigavantry Cup in aid of the Irish Disabled Fly Fishing Association on Sunday, March 15th. The event is open to all fly fishers. Prizes will include top award of a €300 voucher plus many additional prizes. For more details and entry form, see waterfordflyfishing.com or contact Michael Sheehan at 086-1073086.