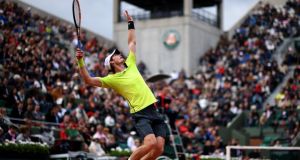 Through wind, gloom and a little uncertainty Andy Murray moved on in his return to the French Open, from Andrey Golubev, a bookish Russian-born free-wheeler who reads Dostoyevsky to an Australian known with locker-room affection as Mad Dog, Marinko Matosevic.

Murray does not lack variety in his opponents but his path to the quarter-finals – eased by the defeat of the world number three and reigning Australian champion, Stanislas Wawrinka, on Monday – is not littered with too many other daredevils.

Murray blitzed the reckless Golubev in the first set (not with quite as much authority as he did Rafael Nadal in the opening of their quarter-final in Rome, but conditions were considerably more difficult here), and then had to grind a bit for a 6-1, 6-4, 3-6, 6-3 win.

It took him 2hr 35min, although he might have been back in the locker room a good deal quicker but for a dip in the third set, when Golubev, an all-out attacker with little regard for caution, delayed his progress with some astonishing hitting. Unforced errors However, his 59 unforced errors just about doubled Murray’s and that proved the difference. Still, Murray was not happy with his serve, which dipped as low as 31 per cent on first effort midway through the third set and sat at just over one in two for the whole match.

That lack of consistency could cost him deeper into the tournament – but probably not against Matosevic, who gained his first win in a grand slam event in 13 attempts, putting out Dustin Brown, 7-6, 6-4, 6-7, 7-5.

Murray knows him well. “I get on very well with Marinko,” he said. “He’s a funny guy. He’s a good ball striker and he’s had some good wins on the Tour, maybe a bit up and down, but he can play good tennis.”

Murray finished his own match soon enough to watch the end of Matosevic-Brown – and the winner’s response to breaking his 13-match losing streak: a long roll across the damp red dirt that left his kit looking as if he had been in a street fight.

“It was an interesting celebration. I have not seen that before. From the time I’ve spent with him I would say Mad Dog is a good name for him. I couldn’t say in front of you guys what the craziest thing he has done is. He’s a good guy, good fun around the locker room, always makes everyone smile, makes everyone laugh. That’s nice.”

Matosevic lit up the interview room, clearly thrilled with his performance – and shedding that unwanted weight of first-round defeats in majors.

“Yeah, we have a lot of fun in the locker room with all the boys,” he said. “But losing is never fun. I mean it’s tough when you’re on 13. I got to 39 in the world, so I thought, I’ve got to do it, I’m better than this. As for the early losses, like once it got to two years, eight matches, then 12, then three years . . . yeah, it’s been tough. But I always knew I was a better player than my grand slam results.” Monte Carlo

Tomorrow it will be all business and he will no doubt bring all the irreverence he showed against Nadal in Monte Carlo last year, when he moved the Spaniard’s water bottles from their near-sacred formation at his courtside chair.

Earlier Murray had an interesting exchange with Fabrice Santoro, the former player and one of the Scot’s favourites, who is now working with ITV. When the Frenchman suggested there were many candidates interested in the coaching vacancy so publicly discussed in the wake of Ivan Lendl’s departure in March, Murray replied: “Are you one of them?”

Santoro smiled and handed him his business card – but more serious alternatives are still the subject of much discussion here – and Murray remains impervious to inquisition. “I’m trying but nobody wants to work with me,” he joked. “I’m trying. Hopefully soon.”

The shock of the day – and the second little ripple of the men’s draw – was Grigor Dimitrov’s unexpected exit, seriously diminishing the tournament’s glamour factor.

In the Bull Ring, where many a reputation has been soaked in blood, Ivo Karlovic, the tallest man in tennis at 6ft 10in and one of a record 38 over-30s players in the men’s draw, was merciless in pounding the 11th seed with his big serve, to win 6-4, 7-5, 7-6. “It’s never easy to play against Ivo,” the Bulgarian said.

“Of course, it’s a big disappointment. I liked my chances here and I’ve been playing good tennis on the clay courts but I don’t want to be too disappointed.” Guardian Service