Neil Francis apologises over remarks on gay people and sports 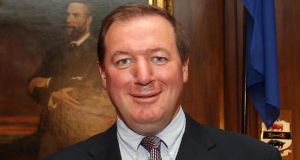 Neil Francis has offered an unreserved apology for comments he made on Sunday, when he claimed that gay people were “not interested in sports”.

The former rugby international made a number of comments on Newstalk’s Off The Ball show with regard to homosexuality in sport that caused huge offence.

He took up an offer from Matt Cooper to go on his Today FM show The Last Word along with Welsh referee Nigel Owens, who came out as gay in 2005, initially to family and friends and then to the wider rugby community in 2007, prior to the Rugby World Cup.

Owens had been critical of Francis’ comments earlier in the day when talking on the Pat Kenny Show but was invited to address the former international second row directly.

Francis, when asked his position 24 hours after his initial comments, explained: “When I got home I had a listen to the interview again. And I must say it didn’t sound like me at all in a sense.

“A lot of people who listened to it said that’s not your form. I realise that I was in a field of landmines and I stood on one or two.

“Listening to what I said last night ... okay on reflection, I said the wrong things and some of the things I said were extremely clumsy. In this instance and on reflection I would like to withdraw those comments and apologise profusely and unreservedly on any issue that might have served with anybody who heard them or who felt offence with what I said.”

Cooper then asked Owens what he thought of the sentiments expressed by Francis to which the Welshman responded: “It’s good that he has been able to go back and reflect on what he said. We all make mistakes in our lives.

Cooper than asked Francis whether his apology had indeed being genuine, to which the latter replied: “People know who I am and that I say what I mean. I don’t think there is any point in saying this unless I meant it.”

He later added: “I would consider myself to be reasonably media savvy and I knew I had wandered into a situation where you were walking on eggshells. Some of the people have reacted to what I said without listening to the interview, which was very disappointing.

“Some of the social media sites have attributed comments to me which were absolutely false, which was disgraceful way to portray what I had said and what I hadn’t said. They have taken licence to it. So anybody who has any issue should listen to it. It’s a poor interview.”

Owens was then invited to address the tone of Francis’s original comments after outlining the supportive reaction from every part of the rugby community he’d enjoyed when coming out as gay. “Sport is for all. It should be that wherever you are of wherever you’re from, you should be feel safe and welcomed in whatever chosen sport you choose as an individual or a team. This is why I was a bit taken aback by Neil’s interview. It wasn’t a case of saying one or two things out of context. (There were) a lot of things like saying that gay people were not interested in sport which was wrong.

“He was saying the changing room was homophobic which was wrong. Then to bring in the stereotype of he doesn’t like ballet . . . yes it is great that he has apologised and I would hope that people would respect that apology as well.

“There are a lot of things he said yesterday, not just one or two comments that were out of line; there were a whole couple of minutes that I just don’t understand where it came from. That was what was disappointing.

“When you have people of Neil’s stature coming out and saying these comments I don’t think people realise what an influence they have. A lot of young people out there who are finding it difficult to deal with the issues, dealing with who they are, it (remarks like those) have a huge influence.

“We don’t want to go out and shout it from the rooftops that we are gay, we just want to be ourselves and get on with our lives.