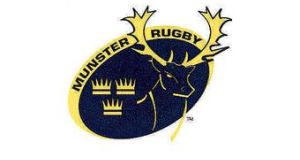 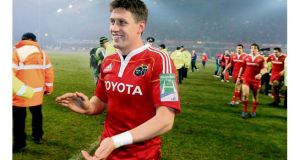 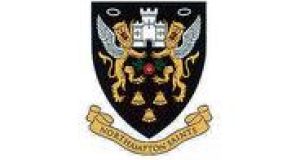 Munster 12 Northampton Saints 9:WHEN FACED with the sin-binning of Paul O’Connell on the hour, while penned on to their own line with a rickety scrum then reduced to seven men, and leading by only 9-6, Munster were clinging on by their fingernails. But then these are Munster fingernails, and they were roared on by a 26,000 crowd who fully appreciated this moment of crisis.

Every Munster player upped their intensity and focus for that 10 minutes, and saw off the last 10, to ensure themselves of a home quarter-final. Guts and no little brains got them there, especially in the utterly contrasting kicking games and game management of the two outhalves, where Ronan O’Gara was generally astute whereas Shane Geraghty’s selection for what Northampton tried to do, or didn’t, was deeply flawed.

An injection off the bench helped no end too, with Damien Varley and Donncha Ryan made significant impacts.

It had been a brutally tough arm-wrestle in which both sides, and especially Northampton, peppered the cold night air with high kicks. In echoes of the first meeting, Munster had their difficulties in the scrums, where Romain Poite persistently penalised them for pulling back on the loosehead side, but also the lineouts as well, though this time it was their improved work in contact and at the breakdown which kept them in the game. There were many heroes, amongst them the old warrior Alan Quinlan, who eclipsed Courtney Lawes, while O’Gara again delivered under pressure whereas Geraghty gave Northampton no targets and no direction.

With their props, the ferocious Soane Tonga’uiha primarily, constantly on the front foot, Northampton might reflect how things could have panned out had they played with a bit more ambition. They never let a ball go beyond Geraghty, who launched an often aimless aerial bombardment – an indication of which was that Quinlan took four high balls around his 22 in the first six minutes.

The cue was set from the off. Ian Dowling, in for the injured Denis Hurley, and Quinlan took the first two high balls, Roger Wilson dropped Northampton’s and though Ben Foden gathered the next one by O’Gara, he was enveloped and Northampton were penalised for going in from the side. O’Gara opened the scoring.

Alas, losing their first two throws meant Munster couldn’t get an early footing and their scrum was struggling. Quinlan was at the centre of most things. He had an off-the-ball joust on the deck with James Downey before being at the centre of another couple of stand-offs between the packs. As the mist rolled in, Munster began cranking it up, running hard in midfield and bringing Paul Warwick in to the line, but a pumped-up Northampton defence were conceding nothing.

Geraghty flashed a drop goal wide and kicked long from inside half-way. Such was the likely consequences of his often aimless punting. Had the touchjudges been more accurate in where the ensuing scrum should have been, O’Gara’s resultant 50-metre penalty attempt might have been in his range. Instead a third penalty for an increasingly dominant Northampton scrum enabled Bruce Reihana to level from 45 metres.

After another wayward dart by Denis Fogarty prompted an attacking Northampton scrum, Munster needed re-energising. Cue Niall Ronan in one of the big plays of the half. Timing his break off the scrum perfectly to envelope Lee Dickson he then bounced to his feet and manufactured a one-handed steal.

That turnover ball was flashed along the line, Jean de Villiers and Keith Earls injecting some pace. Munster went up the line, tried their maul, rumbled close in and O’Gara located a brief chink of light. Poite infuriated the crowd by not policing the breakdown but when Dylan Hartley knocked the ball from Tomás O’Leary, he was penalised for O’Gara to make it 6-3 at the break.

So it continued. Reihana was well wide from 50 metres and to the crowd’s hilarity, a fourth scrum penalty against Munster saw Geraghty shank a penalty below crossbar height before drawing the sides level from in front of the posts. True to type, he then put one well out on the full which led to a rumble infield off a Munster lineout, hands in the ruck and O’Gara restoring Munster’s lead.

Cometh the hour a Dylan Hartley chargedown on O’Leary turned the game on its head. Though O’Leary and O’Gara prevented the try, it led to a succession of five-metre scrums and, worse, a yellow card for supposedly not releasing, but perhaps also for just too much dialogue with the French referee.

When Ashton kicked away possession, it led to the biggest cheer of the night. A superlative chase and tackle by Doug Howlett on Geraghty, followed up by Ryan, led to a penalty for hands in the ruck which O’Gara nailed unerringly.

Geraghty was taken out of his misery. His replacement, Stephen Myler, made it 12-9 with a 45-plus metre penalty for yet another scrum penalty, against the returning Marcus Horan. However, Munster finally got their maul going and they finished safely in opposition territory.

Bizarrely, Northampton kicked their final penalty into touch, perhaps figuring the bonus point would be enough to get them into the quarters as one of the best losers, and Poite signalled the end. His most popular decision of the night.

Munster have assured themselves of a home quarter-final in April, and almost certainly against one of the two best runners-up.

Northampton are now left to sweat on whether they will fill one of those slots, though their bonus point removes four teams from the equation as potential best runners-up – including Ulster, who now must beat Bath with a bonus point and hope that Stade Francais lose by more than seven in Edinburgh.

London Irish know that a win, and scoring two tries, will get them through as one of the two best runners-up, most likely at the expense of Northampton, while they would need a bonus point and deny Leinster one to top Pool Six.