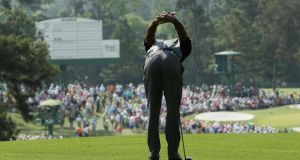 Tiger Woods stretches before hitting on the second fairway during the second round of the Masters in Augusta. Photograph: David J Phillip/AP Photo

For Woods, bedevilled by injuries to knee and back and then plagued by form so poor that he felt it best not to put a scorecard in his hand, his return to Augusta National bore all the signs of a desperate man seeking some sort of redemption from a sacred place.

But, still, there were those who questioned why Woods would put himself through the penance of bringing an out-of-sorts game – which included the pitching yips – to such a severe examination.

Could he chip without incurring a shank? Could he drive the ball without staying out of the trees, and the pine straw? Could he even make the cut?

Well, Woods knew what he was doing. In Friday’s second round, Woods – who was world number one last May but who is now ranked 111th – signed for a 69 to add to his opening 73 to reach the midpoint on 142, two under par.

Which renaissance was the worthier? O’Meara’s, having missed the past eight cuts here in a horrid sequence going back to 2006; or Woods’, who hadn’t played a tournament since withdrawing after 11 holes of the Farmers Insurance Open at Torrey Pines in early February? Take your pick.

O’Meara –a one-time poster boy for Tourism Ireland in promoting Ireland as a golfing destination before Pádraig Harrington heralded the new golden generation by showing his compatriots how to win Major championships – has enjoyed the past few days. Not only the fact that he is playing well, but as much for reuniting with Woods at a place that means so much to both of them.

“My boy Tiger is playing pretty well, he probably saw my name go up on the board and he’s like, ‘I can’t let the old man beat me. I better play good’. I’m really happy for him, hopefully he will play well on the weekend,” said O’Meara.

On his way back

As much as O’Meara’s form has come like a bolt from the blue, it is Woods’s own ability to kick into gear that has been so impressive. Where he chugged along like a damaged engine on his two appearances on the US Tour this season, missing the cut with a second-round 72 in the Phoenix Open and then withdrawing from the San Diego tournament, the man who worked from “sunup to sundown” in the interim has proven all his critics wrong.

Woods has broken 70 only once in 20 Masters starts and his opening-round 73 was only one shot worse than his opening effort in 2005, the last time he won here. On Thursday, after a round that included a couple of wild shots, Woods stood up and insisted he wasn’t out of the reckoning. “You know, I am still in it,” he said, with a poker face of a man holding a three-of-a-kind and knowing other players held stronger hands. But would they buckle?

In yesterday’s second round, Woods listened out for the sounds of the underground irrigation pumps. They were silent. “The SubAirs aren’t going, so they aren’t sucking the moisture out of them,” said Woods, who, you’d suspect, would prefer firmer greens so that others could fritter shots away. Maybe the weekend.

Woods was much like his old self, as he found 14 of 18 greens in regulation. For the second day running, he had 28 putts. He may have some chasing to do, but at least he has played decent golf and moved into the top-15 at the midpoint.

“I’m very proud of what I have done, to be able to dig it out the way I have. I was at a pretty low one in my career [after Torrey Pines] but to basically change an entire [swing] pattern like that and put it in a position where I can compete in a Major championship like this is something I am very proud of,” said Woods.

Certainly the reinvigorated Woods is up for the chase. The role of pursuer is a challenge he wants to embrace. “I’m still right there, 12 back but there’s not a lot of guys ahead of me. And with 36 holes here to go, anything can happen . . . . so, we have a long way to go. There’s so many holes to play and so many different things can happen.”

Tiger. The Chaser. Going for it. Just like the old days. He’s back.

Brooks Koepka: ‘I should probably win’ US PGA Championship 09:32
Stirling and Balbirnie inspire Ireland past England, European football resumes 07:47
Seán Moran: Boylan documentary offers a compelling insight into former Meath boss 06:30
England face up to sterner test as Pakistan enter the bubble 06:00
Nhat Nguyen rallies round his family as dreams put on hold for now 06:00
Here is your handy guide to sport on television this week