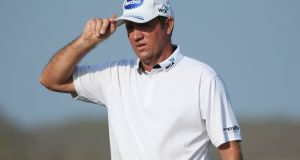 Scott Hend leads the Thailand Classic by two strokes heading into the final round. Photograph: Getty

Australia’s Scott Hend holds the lead heading into the final round of the True Thailand Classic for the second year running as he looks to go one better than 12 months ago.

Hend carded a third round of 70 at Black Mountain Golf Club on Saturday to finish 14 under par, two shots ahead of American Peter Uihlein, with Belgium’s Thomas Pieters and Sweden’s Pelle Edberg a shot further back.

The 43-year-old was one shot clear with 18 holes to play in 2015 but could only manage a closing 72 as compatriot Andrew Dodt came from four shots behind to win thanks to a superb 67.

“It was a good grind today. I felt about two out of 10,” said Hend, who only arrived in Thailand at 1am on Wednesday after making the long journey from Miami, where he shot 22 over par to finish 63rd in the 66-man field in the WGC-Cadillac Championship.

“I’m really tired and very low on energy. I knew it was going to be a tough day and it was very windy, so it was very pleasing.

“It catches up with you sooner or later. You always have a bad body week and a struggle mentally when you travel. If you deal with it well you get away with it and I thought I dealt pretty well with it.”

After starting the day tied for the lead with Edberg, Hend briefly enjoyed a two-shot lead when he birdied the second and Edberg bogeyed after finding water with his approach, but the roles were reversed on the sixth when the Australian thinned a bunker shot across the green.

Uihlein made it a three-way tie with his third birdie of the day on the ninth and bounced back from a bogey on the 12th to birdie the next, but Hend also picked up a shot at the same hole to reclaim the lead.

That only lasted a few minutes as Hend three-putted the 14th and looked in danger of dropping another shot on the next, only to chip in from the back of the green and then birdie the short 17th.

Uihlein, who led after an opening 64, missed good birdie chances on the closing stretch but was pleased to card a 69 as blustery winds made scoring difficult.

“It was tough out there but fun and I was pleased with how the day went and how I handled it mentally,” the former European Tour rookie of the year said.

“I know Thomas shot six under but apart from that there were not a lot of guys going low so it was a good day. At the start of every week you are trying to be in there with a chance to win on Sunday. I feel like each time I am in this potion that I get more comfortable, more confident and able to play better.”

Pieters, who won on consecutive appearances in the Czech Masters and KLM Open last year, was another to make a late arrival in Thailand and was nine shots off the lead — and three outside the cut — following an opening 73.

However, the 24-year-old then carded a 66 in the second round on Friday and followed it with another on Saturday thanks to six birdies and no bogeys.

Pieters, who would secure his place in the upcoming WGC-Dell Match Play with a good finish in Hua Hin, told European Tour Radio: “I was very sick last week with a sinus infection and some fever and am still on antibiotics. ”That didn’t help in this heat. I’m feeling better day by day, should be fine (on Sunday).

“You have to drink loads and eat loads. I remember the first day Gary Stal passed out on the course. It shows that if you don’t drink enough, you can get dizzy and it’s not good.”

Speaking about his back-to-back 66s, Pieters added: “I haven’t done much the last two days. I made my par putts and rolled in a couple of short birdie putts. I haven’t really made any long putts but overall I’m quite happy.”