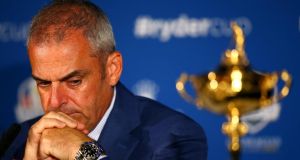 The Dubliner’s decision meant that there was no place for former world number one Luke Donald as Europe look to claim an eighth win in the last 10 stagings of the biennial contest against the United States.

It was a particularly tough decision for McGinley as he was Donald's first partner in a Ryder Cup match (2004).

Westwood has made eight consecutive appearances since making his debut in 1997, winning 21 points from 37 matches.

The 41-year-old finished seventh in the Masters in April and won in Malaysia the following week, but suffered a slump in form until a final round of 63 in the WGC-Bridgestone Invitational in August.

He also shared the lead after the first round of the US PGA Championship before finishing 15th, but failed to advance beyond the first FedEx Cup play-off event.

Gallacher came agonisingly close to securing an automatic place on the team by finishing third in the Italian Open on Sunday, just one shot out of the share of second place he required.

The previous week he had finished sixth in the Czech Masters to push his nearer the cusp of automatic selection.

However, McGinley stayed on in Turin after missing the cut and witnessed the Scot card a flawless closing 65 to record his 10th top-10 finish of a qualifying campaign which also saw him retain his Dubai Desert Classic title in February.

Gallacher has demonstrated a distinct liking for the Glengeales course having finished runner-up and twice, sixth there is tournament play. He is one of three rookies in the team alongisde first-timers Victor Dubuisson and Jamie Donaldson.

“Stevie’s first words to me when I told him he was in the team were, ‘That’s brilliant wee man’,” McGinley told a news conference at Wentworth on the outskirts of London.

“Of course there’s always a concern that he’s a rookie but I’m not afraid to pick a rookie if he’s good enough and there’s no doubt Stevie earned his place in this team.”

The Irishman said he was particularly impressed with Gallacher’s display in Turin. “His performances last week in particular had a big effect on me,” explained

McGinley. “Stevie played relatively poorly for three weeks in a row in America but came back and had a good performance in the Czech Masters and then played well last week.

“For me Friday afternoon was when he showed he really wanted to be a Ryder Cup player. To come home in 30 shots and get within touching distance of the leaders showed just how strong he is,” added McGinley.

Poulter has earned the nickname ‘Mr Ryder Cup’ and it is hard not to see why. This is the third time he has needed a wild card to make the team, but he has raised his game on every occasion and none more so than at Medinah in 2012. The 38-year-old won all four of his matches and famously birdied the last five holes alongside Rory McIlroy to beat Jason Dufner and Zach Johnson in the Saturday fourballs. It was the match that turned the Ryder Cup around for Europe and gaver them momentum going into Sunday’s Singles.

Poulter also beat Webb Simpson in the singles to take his record to an amazing 12 wins from 15 matches.