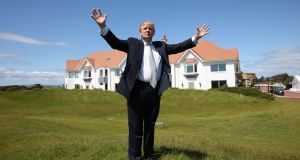 Donald Trump at his Turnberry resort during last year’s Women’s British Open. The R&A has confirmed that the British Open will not take place at the venue until at least 2022. Photo: Getty Images

The R&A has dealt a blow to Donald Trump by confirming the Open Championship will not be held at Turnberry before 2022. The chief executive of that governing body, though, still refuses to provide a public stance on whether Trump’s offensive opinions should exclude his venues from golf.

Trump’s views on Mexican immigrants in the United States and Muslims have triggered a dilemma for a sport which is seeking to be as inclusive as possible. In April 2014 Trump confirmed his buy-out of Turnberry and subsequently promised to spend £200m on an upgrade of the property, with the approval of the R&A. “This is golf’s greatest canvas,” Trump said at the time. “People cannot avoid it now.”

At that point, it seemed inconceivable there would be such a wait for Turnberry to host the third major of the year, as it last did in 2009. The R&A will not specifically cite the Republican party’s potential presidential candidate’s controversial statements as pivotal and seem anxious to kick the issue into the long grass, but the inference is clear.

“We are in advance negotiations and discussions around 2020 and 2021, one of which will be in England because we like to get a balance between English courses and Scottish courses,” Martin Slumbers, the R&A’s new chief executive, explained.

“At no point during those discussions has Turnberry been part of that. So that’s where we are. And 2022 and beyond it is something we don’t have to think about for a few years.

“But we are also very focused on the macro environment. We as an organisation have said that we believe golf should be open to all, regardless of gender, race, nationality or religion, and that’s where we sit.”

Slumbers added that Turnberry remains part of a 10-course pool of Open venues. When pressed on his thoughts on the circus which surrounded Trump’s appearance at the Women’s British Open, also at Turnberry, last July, he said: “I’d much rather see championships focus on the golf and what’s going on. We host the Open Championship to crown the champion golfer of the year on the Sunday night and thankfully I think it’s much better to focus on the golf because that’s what we’re there for.

“The issue of Turnberry wasn’t something that I expected to be talking about [upon appointment]. I think Turnberry is a most wonderful golf course. It’s a brilliant test of links golf and it certainly ranks as one of the 10 best courses, links courses, that we have in this country.”

Slumbers’ predecessor, Peter Dawson, claimed it was “absurd” to believe what was said by Trump during an election campaign would influence the R&A. For all that the new chief executive tried to pirouette on a pin during a meeting with golf writers on Monday – and was increasingly uncomfortable in doing so – that position has clearly altered.

A beneficiary of this scenario should be Royal St George’s, the east Kent course which last hosted the Open in 2011 and which is understood to be the favourite for 2020, with the 150th Open expected to be held at St Andrews a year later.