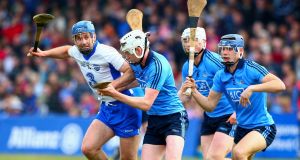 A game of fits and starts, the sort of tactical gumming-up of the works that you can easily imagine folk grumbling about come summertime. Rather than engaging in hand-to-hand combat, Dublin and Waterford swished bayonets in each other’s direction, two deep-lying defensive set-ups daring each other to shoot from distance.

Waterford dropped a world of ball either wide or short, Dublin landed bomb after bomb over Stephen O’Keeffe’s crossbar. By the end, the city side were very comfortable winners.

David Treacy potted nine frees for Dublin, by our count five of them from inside his own half. Darragh O’Connell, Chris Crummey and Johnny McCaffrey followed him from play, all from out around midfield or further. The only inside forward on either side to make an impact was man-of-the-match Eamon Dillon, whose four points from play lit up the afternoon. Tot it all up and Dublin won by just about as much as they could have, given neither side threatened a goal.

“All over the field I thought Dublin were full value for it,” said Derek McGrath after his team’s first league defeat since March 30th, 2014. “I thought they just outplayed us, outthought us and outfought us. I’d have no argument with it, I thought Dublin were very good . . . I was just surprised by how flat we were during the game. We were extremely flat but any analysis of us would be counter-balanced by how good Dublin were.”

Ger Cunningham will be wary enough about taking too much from the game. His side were professional and obdurate in facing up to the league leaders but you wouldn’t say they sparkled particularly. Dillon was outstanding in attack, slinging over points from impossible angles under touch-tight pressure from Waterford full-back Barry Coughlan. But other than Cian O’Callaghan and Oisín Gough (again), their defending was a triumph of numbers and structure rather than stirring individual displays.

Both sides came in and out of this like the tides. The way Waterford swished over the opening three scores from Patrick Curran (two) and Colin Dunford made you wonder if Dublin would keep it pucked out to them. The way Ger Cunningham’s side responded with the next six in a row left you scratching your head at the security of Waterford’s defensive lockbox. It was a bitty kind of an afternoon anywhere you looked.

Waterford led 0-8 to 0-7 at the break and looked reasonable value for it. Three smashing Dillon points had pushed Dublin into the lead after the sides shared the opening spell 0-3 apiece but a couple of gargantuan points from Austin Gleeson and another from Curran sent Waterford in ahead.

But as McGrath said, his team were curiously flat after the restart. Dublin outscored them by 0-12 to 0-5 in the second half and they didn’t score from play in the closing half an hour. Dublin were stronger, cannier and more accurate.

Dillon knifed another, Niall McMorrow split the posts on the turn after plucking a puck-out from the air and Treacy was infallible from frees. It was over long before the end and suddenly Dublin have three wins from three. None of us thought that was coming when Tipp scorched them in the league opener last month. “I don’t know where that performance came from,” said Cunningham when reminded about it. “We had been hurling well from the start of the year, and for some reason we didn’t bring any intensity to the game in Tipperary . . . we recovered well, and the two home victories, the lads have built up confidence. And there was a challenge today to come here, and we wanted to qualify for the quarter-final, it gives us another game to look forward to. So delighted.”

All in the Game: Capello plumps for Calamity James over Joe Hart 10:20
The Offload: Roll up for rugby’s very own horror film 09:00
Ken Early on Mick McCarthy II; racing will endure even the harshest criticisms 07:19
Virtual Grand National raises €3m for NHS and Irish Red Cross 06:52
Ken Early: Mick McCarthy II was no blockbuster, more of a flop 07:00
Crossword Get access to over 6,000 interactive crosswords