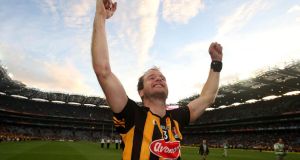 The recent spate of inter-county retirements continues with news of JJ Delaney’s decision to hang up his hurl at the top level. The Kilkenny player, regarded as one of the best defenders in the history of the game, is just 32 and a current All Star but he had an extensive career.

Winner of nine senior All-Ireland medals - just one behind team-mate Henry Shefflin - 11 Leinsters, eight national leagues, seven All Stars, two Fitzgibbon Cups with Waterford IT and the Hurler of the Year accolade in 2003, his is one of the most decorated careers in inter-county hurling.

Although not exceptionally tall, he was virtually unbeatable under dropping ball and divided his time with Kilkenny between wing back, viewed as his best position, and full back - dividing his All Stars almost evenly between the two positions.

His most recent season ended in All-Ireland success after a replay against Tipperary and in the 18th minute of that match his breath-taking hook on Séamus Callanan was emblematic of Kilkenny’s defiance that day.

His retirement brings to a staggering total of 38 the number of All-Ireland medals in the possession of Kilkenny players who have retired in recent weeks, as Delaney’s decision comes in the wake of similar announcements by David Herity, Aidan Fogarty, Brian Hogan and Tommy Walsh.

His retirement was announced on the Kilkenny GAA website.

“I wish to announce that I am retiring from the Kilkenny senior hurling panel. I have enjoyed my time being part of such a talented group of players and management teams. I wish to thank Brian Cody and his selectors for allowing me to play hurling at the highest level.

“I also thank the Kilkenny county board for their support on and off the field. Thanks to the GPA - they been a great help to my development in both my sporting and professional career.

“My father, family, close friends and my girlfriend Aisling have been a huge source of encouragement and support to me over the years. I thank my club The Fenians, my former teachers and various coaches for instilling in me a love for the greatest field game in the world.

“It’s been amazing the encouragement the Kilkenny supporters have given me down through the years and for this I thank you all. I am grateful to my employer Kingspan Insulation for their support.

“I wish the Kilkenny senior hurling panel and management team continued success in the future.”

Irish Times hurling analyst Nicky English paid this tribute to the defender who made his debut back in 2001:

“He was a brilliant full back but in his earlier life at number seven, he was the best I ever saw in that position. What stays with me is how his arm could seemingly grow at times just when it looked like someone was about to out-reach him or the ball was going to pass over him, his hand would appear to extend another few inches and he’d come down with the ball.

“His positional sense was also exceptional and he could tackle. He didn’t counter-attack but he was a brilliant defender in terms of hooking and blocking, one of the best I’ve seen.

“I remember seeing him this year in Tullamore under severe pressure coming out the field and really putting his shoulder to the wheel when they were under serious strain in that mad nine or 10 minutes in the drawn match when from nowhere Galway had got a couple of goals. JJ was everywhere trying to hold it together.

“He’s still young and was brilliant in the All-Ireland final this year but I’m reminded of a quote by Mick Roche (Tipperary All-Ireland winner in 1960s), ‘it’s better to be asking someone why he went rather why he didn’t’.”