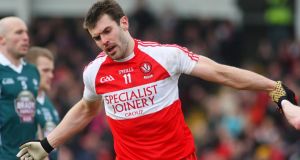 Derry look set for the semi-final of the league after a victory over Kildare at Celtic Park that was much more one-sided than the five-point margin might suggest.

Late goals from Eamon Callaghan and Thomas Moolick in the 70th and 71st minutes allowed Kildare a sheen of respectability that their performance did not merit as the Mark Lynch and the Derry attack ran their defence ragged.

Goals from Cailean O’Boyle and Lynch were the highlights of the Oak Leaf win in a game that was over as contest before it entered its final quarter.

The league play-offs now almost certainly beckon for Derry and manager Brian McIver is hoping to see his side get the experience of running out at Croke Park in the knockout stages. “We would be keen to get back to Croke Park, we’ve a very young side here and Croke Park’s very different from any other field in the country and hopefully that will be the scenario that will pan out and we’ll get back there.”

Derry absolutely tore into Kildare from the start and could have registered a goal from their first attack as Emmett McGuckin fired over when bearing down on goal.

Piercing move
Lynch soon added a point from 40 metres before Derry did find the net on seven minutes, a piercing move finishing with O’Boyle blasting home. When Lynch added a free Derry were 1-3 to no score in front.

An injury to Fergal Doherty at midfield disrupted the Derry flow and with Kildare gaining the upper hand in that area they struck back on 15 minutes when a counter attack finished with Keith Cribbin palming a goal past Thomas Mallon.

Kildare had the final word of the first half when Hugh Lynch pointed in injury-time to make it 1-7 to 1-3.

Derry made their superiority show in the 15 minutes after half-time. Lynch (free) and Ciarán McFaul had already pointed when the Derry skipper burst through the heart of the Kildare defence to find the bottom corner on 39 minutes.

By the 48th minute points from Benny Heron, O’Boyle, Enda Lynn and Lynch made it 2-13 to 1-4 to put Derry out of site. As Brian McIver ran his bench, Derry lost momentum and Callaghan and Moolick both beat Thomas Mallon in the Derry goal. That took the lopsided look off the scoreline though the contest had ended 20 minutes earlier.

Owen Doyle: Calamity in Cardiff is hard to get your head around 06:00
Budd Schulberg: The screenwriter who made Marlon Brando a star 06:00
Jack Conan makes an impact as he returns in Rome 06:00
Gerry Thornley: Wales have the momentum to claim Grand Slam 05:00
Nickey Brennan says evidence of games swayed cynical play vote 01:46
Crossword Get access to over 6,000 interactive crosswords