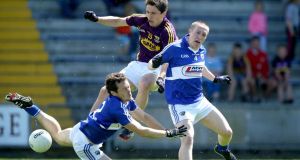 For much of this game it looked as if Wexford would edge their way to victory until a 69th-minute Niall Donoher point set Laois up for the minimum victory in this entertaining football Qualifier at Wexford Park yesterday.

The home side who had played into the strong breeze in the opening half found themselves just a point adrift at the interval.

Having battled their way to a two-point lead entering the closing five minutes it looked as if Wexford would move on to victory – but that is until a John O’Loughlin-inspired late rally produced three unanswered points in the closing four minutes to snatch what looked an unlikely victory.

When it looked as if Laois were wilting it was O’Loughlin who grasped the game with his unrelenting workrate throughout the pitch eventually reaping dividends, while during the course of the 70 minutes he also kicked four fine points from play.

But the game came too early for Wexford following their exertions against Dublin seven days earlier. They showed tired legs in the closing stages when they had got themselves into a position to push on for victory. But it was a frustrating defeat for the homeside in the end.

But Laois manager Tomás O Flátharta will be looking for considerable improvement for the next round phase.

“We were disappointed with our first half showing with the win. We put ourselves in a difficult position. Wexford seemed to have got the upper hand in the closing quarter, but we managed to seize control in the closing five minutes. It was a critical period and the lads kept their composure to kick the three late points.”

As for Wexford manager Aidan O’Brien it has been a disappointing seven days. “‘I thought we played really well. When we gained that two point second half lead we should have pushed on but tired legs then began to kick in. It was disappointing to go out having controlled matters for so long.’

While it was frustrating first half for Laois despite an early John O’Loughlin point, for it was the home side who were playing the more lively and positive football, as Ciarán Lyng kicked over some fine points, leaving them leading 0-6 to 0-2 after 13 minutes of quality attacking football into the wind.

Laois responded with points from Donie Kingston, Loughlin and Ross Munnelly, while just on the break it was a point from substitute Damien O’Connor that helped them into a 0-11 to 0-10 interval lead.

After O’Loughlin had extended his sides lead within one minute of the restart, Wexford exploded into the game, with two excellent PJ Banville points to go 0-13 to 0-12 in front. While a Kingston pointed free kept Laois in touch it was Wexford, through fine Lyng points, who moved into a 0-17 to 0-15 lead with five minutes remaining.

From there to the finish it was Laois who grasped the game, with a Munnelly pointed free leaving the minimum separating the sides, before three minutes from the end substitute M J Tierney pointed a free to level the sides. With just 30 seconds remaining and extra time beckoning it was Donoher who moved forward to kick the match-winning point.